Sharia – Muslims Cannot “Show the Way to Police” Against Other Muslims

Why haven’t Muslims in America and Europe come out of the woodwork by the thousands to provide the identities of jihadis at their mosques, Islamic schools, and neighborhoods to law enforcement?

The reason is the same as it always is:  it is a violation of Sharia (Islamic Law) – the guiding doctrine which drives Islam and the Muslims who submit to it. 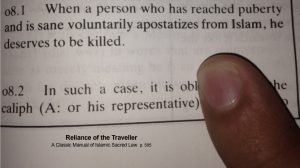 Sharia goes on to say:  “There is no indemnity for killing an apostate since it is killing someone who deserves to die.” (o8.4)

But Apostasy is not simply “converting out” of Islam.  It is much more than that.

According to authoritative Sharia, “Acts That Entail Leaving Islam” (Apostasy) include:

“To be sarcastic about any ruling of the Sacred Law (Sharia) or to deny that Allah intended the Prophet’s message to be the religion followed by the entire world.” [Ibid, o8.7 (19-20)]

It is a capital crime in Islam for Muslims to deny Sharia in any way.  Islam is Sharia and Sharia is Islam.

In the West there is a reason why the Muslim community is not helping law enforcement at the local and federal level.  It is because it is unlawful under Sharia.

It is all about Sharia.

Specifically, the Islamic Laws of SLANDER and TALEBEARING are clear and make it impossible for Muslims to help law enforcement officials against other Muslims without putting themselves at risk.

This is why people who draw cartoons or make movies about Islam are at risk of being killed.

Koran 49:12 specifically states “Do not slander (spy on) one another” and “Woe to whomever disparages others behind their back or in their face.” (Koran 104:1)

Mohammad said “The talebearer will not enter paradise” and “The Muslim is the brother of the Muslim. He does not betray him, lie to him, or hang back from coming to his aid.”

Sharia defines “talebearing” as follows:  “The reality of talebearing lies in divulging a secret, in revealing something confidential whose disclosure is resented.” (Ibid, r3.1)

Sharia specifically identifies that (r7.0) “Giving Directions to Someone Who Wants to Do Wrong” is considered “Talebearing,” and includes “showing the way to policemen.”

Muslims follow sharia because that is what being a Muslim means – someone who submits to Islam. Submitting to Islam means obeying the Sharia of Allah.