In the wake of the Palm Sunday killings of Christians in two churches in Egypt by Muslims, UTT repeated the truth that what happens overseas is happening or will happen here.

Attacking Christians is also sharia compliant.  It is lawful in Islam to do what the two Muslims did in Egypt last Sunday (Palm Sunday).  It is happening here as well.

This week, Khalil Abu Rayyan – a Muslim from the Detroit, Michigan area – pled guilty to weapons charges related to his plan to attack a Christian church and a hospital, as well as behead non-Muslims and skin them “like sheep.” 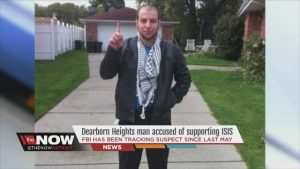 Where did Rayyan get the idea to kill and behead Christians?

From the most widely used text book on Islam used in U.S. Islamic junior high schools – What Islam is All About:  “Islam is not a religion, however, but a complete way of life…The basis of the legal and political system is the Shari’ah of Allah…The duty of Muslim citizens is to be loyal to the Islamic State.”

What Islam is All About also has this to say about Jews and Christians:

“The Jews and the Christians are invited by Allah to examine and accept His last revelation.  If any do so, they will be fulfilling the ultimate purpose of all the Prophets.  If they reject it arrogantly and say Allah only sent revelation to them, then they close their hearts and invite destruction upon themselves.” (p. 82)

Koran 5:51 legally controls relations between Muslims and non-Muslims, and states:  “O you who believe! Do not take friends from the Jews and the Christians, as they are but friends of each other.  And if any among you befriends them, then surely, he is one of them…”

The Tafsir legally defines every verse in the Koran.  Referring to Koran 5:51, the most authoritative Tafsir in Islam, Tafsir Ibn Kathir states:  “Allah forbids His believing servants from having Jews and Christians as friends because they are the enemies of Islam and its people, may Allah curse them.”

So a reasonable person can see where Khalil Abu Rayyan and others might learn to hate Christians and Jews.

So where did Rayyan get the idea to behead Christians? 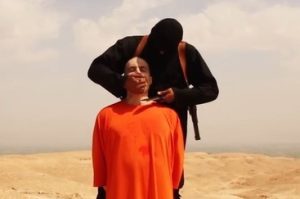 “God revealed His will to the angels, saying: ‘I shall be with you. Give courage to the believers. I shall cast terror into the hearts of the infidels. Strike off their heads, strike off the very tips of their fingers.'” (Koran 8:12)

“When you meet the unbelievers in the battlefield strike off their heads.” (Koran 47:4)

The most authoritative biography of Islam’s prophet Mohammad – The Life of Mohammad, by Ibn Ishaq – records that Mohammad participated in beheading 900 Jews at the Battle of the Trench.  Since the Koran commands Muslims to follow the “perfect example” of Mohammad for all time, it is easy to see how they might believe they are commanded to behead non-Muslims.

What happens overseas is happening or will happen here.  The Muslim Jihadis are doing what their god Allah commands them to do in the Koran and what their prophet set as a “perfect example” for them.