As in nearly every jihadi attack in America since 9/11 – those thwarted and those which have succeed in their evil plans – the jihadis were trained at a Muslim Brotherhood organization, the FBI is “still looking” for a motive, anti-American groups like the ACLU and the Southern Poverty Law Center side with the terrorists, the media focuses on ensuring Muslims are not offended and turns to Hamas (doing business as CAIR) for advice, and the root of the problem is – yet again – ignored. 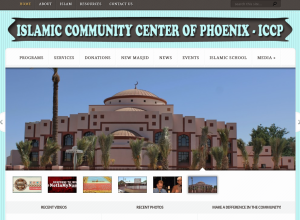 The FBI was investigating NAIT back in the 1980’s for being a part of the Ikhwan (MB) in America.

The Imam of the ICCP is Sheikh Mahmoud Abdul-Aziz Ahmad Sulaiman, who has been at the ICCP since 2002.  Readers may remember his name because he was one of the “flying imams” who filed a lawsuit in 2007 against US Airways for allegedly showing discrimination in removing them from a flight after the imams’ suspicious behavior raised alarm among crew and passengers.  Sulaiman is a 1992 graduate of Al-Azhar University in Cairo, Egypt – the most pre-eminent and oldest school of Islamic jurisprudence on the planet.  As the leading authority on sunni Islamic jurisprudence, Al Azhar states it is obligatory for Muslims to wage jihad to destroy the Dar al Harb (house of war) until only the Dar al Islam (house of Islam) remains and only Sharia is the law of the land.

The Muslim Brotherhood’s Arabic website says it is waging a “long and unrelenting jihad” against the West.  Their strategic document for North America – “An Explanatory Memorandum” – says “their work in America is a kind of grand jihad and calls for “Civilization Jihad” to “destroy Western civilization from within.”  The Muslim Brotherhood’s By-Laws state the MB “is an international Muslim body which seeks to establish Allah’s law (Sharia) in the land…” and call Muslims to “be fully prepared to fight the tyrants and enemies of Allah as a prelude to establishing the Islamic state.”

The Islamic Community Center of Phoenix is an MB front and two of its longstanding members committing jihad against non-Muslims in accordance with Sharia.  What else would you expect?

The ICCP’s President Usama Shami said in a news interview that “All of the teachings in this mosque is against those actions (taken by Simpson and Soofi)…both of them were never engaged in any politics or any extreme views or extreme opinions.”

It is interesting that when Shami spoke with the LA Times he said he had not seen Simpson in a month, but later in the above video interview that time was extended to two to three months.

Will we believe him or the doctrine the MB states his Islamic Center adheres to?

Shami’s comments are an interesting contrast to those of Simpson’s attorney who said:  “He was very devout.  He was very vocal about being devout…I know that some of the statements he made like if you die on the battlefield then you get, whatever, you get the wives…that’s a belief of the Muslim faith.”

Nearly every jihadi who has launched an attack on U.S. soil since and including 9/11/2001, as well as those attacks which were thwarted by law enforcement, has been “radicalized”, trained, funded, and/or supported by one of the thousands of Muslim Brotherhood organizations across the United States.  From the Muslim Students Association (MSA), the Islamic Societies, Islamic Centers, Muslim American Society, and so many others, jihadis are launching jihad on our home turf and the very organizations and individuals leading those organizations are getting a free pass.

When will the arrest warrant for Usama Shami be issued for material support of terrorism?  How about shutting down the ICCP, seizing its property, taking its money, and bulldozing it to the ground?

How bad will it have to get before you decide enough is enough, America?

Leave a Reply to Center for Security Policy | Looking for a conspiracy America? It’s NOT Jade Helm…