As Americans come to better understand sharia is real law and jihadis intend to impose it on all muslims and non-muslims alike, it becomes important to know when sharia adherence is increasing in a particular area because it indicates violence from the jihadis will soon follow.

As police and military units have discovered, adherence to sharia is directly proportional to the level of violence advocated in the Islamic community against those who do not want to adhere to sharia.

The stated purpose of Islam is to impose “Allah’s divine law”/sharia on every human being on earth through jihad – warfare against non-muslims.  A “muslim” is someone who adheres to Islam.  To adhere to Islam is to adhere to sharia.

For a review on basic tenants of sharia click here.

A study published in 2011 reveals the result of 100 randomly surveyed mosques across America.  The study measured the correlation between sharia adherence and the promotion of violence through published literature at the mosque, comments and teachings of the Imam and guest speakers, and other factors.  This “Mapping Sharia” study revealed a one to one correlation between sharia adherence/compliance and violence taught at Islamic centers, mosques, and masjids across the United States.

In the New York Police Department’s landmark 2007 report on the homegrown threat entitled, “Radicalization in the West” the NYPD identified the implementation of sharia and the establishment of a global Islamic State (caliphate) as the driving “Jihadi-Salafi ideology” behind jihadists in the U.S and beyond (page 17).  The report notes the “progression or gravitation towards Salafi Islam” and regular attendance at a salafi mosque are two key indicators of “radicalization” of muslims towards jihad.  The term “salafi” comes from the Islamic phrase “al salaf al salih” or the “righteous predecessors,” which are the first generations of Muslims.  These are individuals who strictly follow “Allah’s divine law” also known as “sharia.”  While there are debates among salafis on a variety of issues, there is no legal disagreement in the sharia on the definition and obligation of jihad, nor of how muslims must relate to non-muslims.

The NYPD report identifies “signatures” of “Salafism” – or what I call here “Sharia Adherence” – which includes:  being part of a group which will strengthen your salafis/sharia adherence, and “wearing traditional Islamic clothing, growing a beard (page 31).”

Here are a few visible signs of sharia adherence:

Sharia adherent men will have short/trimmed mustaches but their beards are often unkempt.

“Cut the mustaches short and leave the beard as it is.” Bukhari 7:781 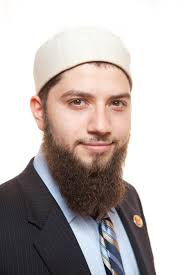 In Islam, Mohammad is the most perfect example of a muslim.  Islamic men who dye their beards red with henna are identifying themselves with the Prophet Mohammad who wore his beard this way and approved it.  No muslims can dye their beards black, except those fighting in “Allah’s cause”/jihad. 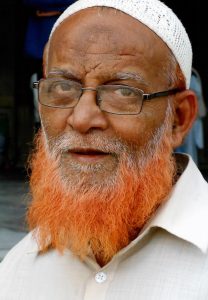 Sunni Islamic male muslims who wear the black headdress are identifying themselves as jihadis. Overseas, American military soldiers and Marines understand this. While only a few sightings have been reported in the United States, if this is seen in your community, it should be taken seriously.  In the shia community, a man wearing the black headdress is claiming he is a descendant of Islam’s prophet Mohammad. 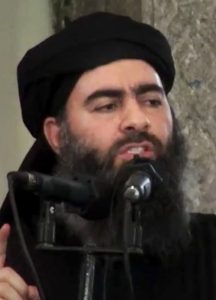 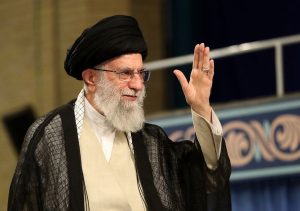 Gold and Silk Prohibited for Men

In sharia, men are not to wear gold or do any other thing that is similar to what women do.  Muslim women are allowed to wear gold and other things that make them attractive to their husbands.

Ibn al-Qayyim said in I’laam al-Muwaqqi’een (2/109):  “Similarly the prohibition on gold and silk for men is decreed so as to block the means that may lead to men imitating women.” 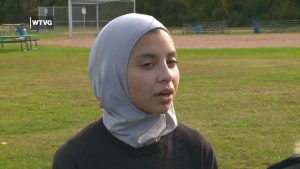 Female in Texas with hijab 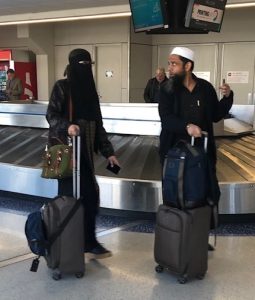 The zebiba is the mark on a muslim man’s head caused from banging his head on the ground during daily prayers. 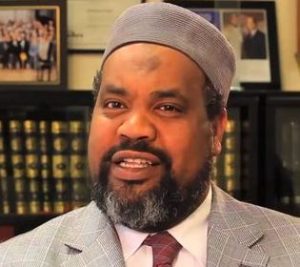 Many people mistake the one raised finger by muslims as an “ISIS salute.”  In fact, muslims understand that means they believe in the Oneness of Allah – one god.  This is something muslims do several times each day during prayers and is not reserved for military jihadists. 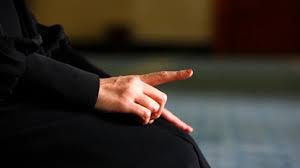 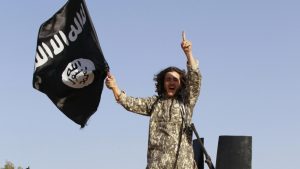 The Prophet said “Whatever is below the ankles of the izār is in the fire.”
(Sahih Bukhari).  This means that muslims who wear pants below their ankles will be inhabitants of hell.  In the U.S. muslim men may wear traditional Islamic dress (sharia adherent) or simply roll up their blue jeans. 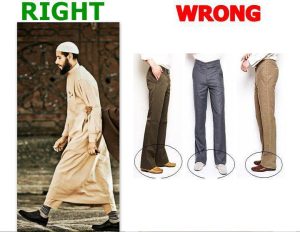 While seeing the black flag of Jihad is not common in the United States, it is becoming more common in Europe and elsewhere. Seeing this flying in a market place (as it has been seen and photographed in numerous cities around Europe) is a significant indicator of violence brewing in your community.  It means the jihadis are identifying themselves in the open meaning they are bold and unafraid of the local security apparatus (police etc).

The “black flag of jihad” has the shahada on it, which is the Islamic statement of faith and has been around for centuries. 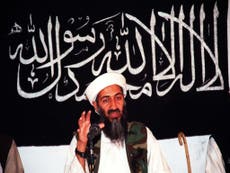 Al Azhar University in Cairo, Egypt is the oldest and most prestigious school of Islamic jurisprudence on the planet.  Its graduates wear headdresses which are red with a large white band around it.  A muslim man wearing this is not only sharia adherent, he teach others about sharia and, therefore, teaches muslims the obligation to overthrow all non-muslims governments and societies by jihad. 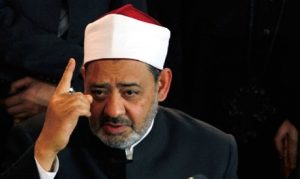