The corrupt and terrorist-supporting Southern Poverty Law Center (SPLC) is helping Understanding the Threat (UTT) promote a 5 day/5 city tour through Iowa, Wisconsin, and Minnesota to educate/train citizens about the threat of the Islamic Movement.

In the same way Jimmy Carter demonstrated John Bolton is the right man to be the National Security Advisor to the President by calling Mr. Trump’s decision to name Mr. Bolton his “worst mistake,” the SPLC actually demonstrates the effectiveness of UTT when it publishes defamatory comments about our activities.

This is because rational people know the SPLC is an unprofessional, corrupt, terrorist-supporting hate group.

In its attacks on UTT’s 5 city tour, the SPLC uses its typical inflammatory phrases such as:  anti-muslim, right-wing, conspiracy theories, disgraced, and the like.

In fact, the SPLC states on their website, “Guandolo was invited to speak in San Diego in February where he proceeded to absurdly claim that a local mosque had ties to the Muslim Brotherhood.”

It is surprising that although the terrorist-supporting SPLC actually has attorneys working in its offices, they cannot seem to read or discern basic legal facts.

It is a fact the Islamic Center of San Diego, to which the SPLC is referring, is owned by the North American Islamic Trust (NAIT).

It is a fact in evidence that NAIT is identified by the U.S. Department of Justice as a Muslim Brotherhood organization which directly provided thousands of dollars to Hamas leaders and organizations overseas.

It is a fact the United States government had designated Hamas a foreign terrorist organization.

It is a fact Hamas is an inherent part of the Muslim Brotherhood.

Maybe this is why the Islamic Center of San Diego – its leadership and members – provided direct support to 9/11 hijackers Khalid al Mihdhar and Nawaf al Hazmi, including financial support ($5000) through the Islamic Center of San Diego’s bank account from the Ali Abdul Aziz Ali, the nephew of the 9/11 mastermind Khalid Sheikh Mohammed (page 220, The 9/11 Commission Report).

This is who the Southern Poverty Law Center defends – terrorists. 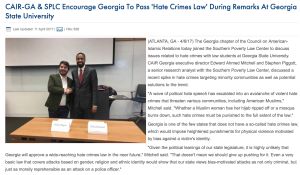 On a regular basis, the Southern Poverty Law Center (SPLC) also defends the terrorist group Hamas doing business as the Council on American Islamic Relations (CAIR).  They defend these Hamas terrorists despite the fact SPLC President Richard Cohen sat right next to Chris Gaubatz as he testified at Senator Cruz’s hearing on the Islamic Movement in the United States in June 2016. 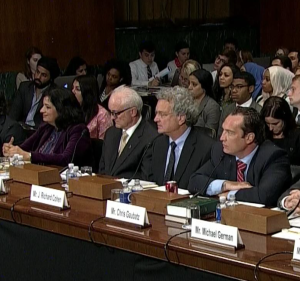 Mr. Gaubatz is the  man who went undercover inside CAIR in 2008 pulling over 12,000 documents out of their headquarters.  Watch the video HERE as Mr. Gaubatz details his intimate knowledge of Hamas (dba CAIR) while SPLC President Richard Cohen sits and listens.

It is hard to take the SPLC seriously when they have hundreds of millions of dollars in offshore accounts, openly defend terrorists, and do little more than slander those speaking truth about real threats.

But then again, that is what Marxists do.

Somewhere it is written that “Material Support for Terrorism” is a federal felony.