As if on cue, media across the Dallas-Fort Worth area of Texas launched an Information Operation to defend a muslim and attack citizens concerned about the Islamic threat to Texas and the nation.

Citizens and GOP leaders have raised questions about the Vice Chair of the Tarrant County (Texas) GOP, who is a muslim man named Dr. Shahid Shafi.

The media – as per their SOP – alleges bigotry and “Islamophobia,” while simultaneously promoting the terrorist group Hamas doing business as CAIR.

Similar stories ran in the Dallas Morning News (Sarah Sarder), the Fort Worth Star Telegram (Anna Tinsley), the Texas Observer (Gus Bova) and others, despite the fact UTT President John Guandolo directly contacted Tinsley and Bova with facts and evidence.

The media attacks citizens concerned about the Islamic Movements unthwarted assault on liberty while promoting Hamas terrorists from CAIR.

Click CAIR is Hamas for a list of facts and evidence that reveals CAIR was created by the U.S. Muslim Brotherhood’s Palestine Committee, which is Hamas in the United States.

UTT also made the media aware of our standing offer:  demonstrate that what UTT teaches about sharia, its authority in Islam and what it says is incorrect, and UTT will cease teaching the information and will give the person who brings it to their attention $1000 cash.

In four (4) years, no takers.  What UTT teaches about Islam is air tight.  Put down the ad hominem attacks, act like an adult for 5 minutes, and prove us wrong.

The security of Texas and the nation are at stake.

Where is the loving version of Islam taught?

Can you name one book of Islamic law (sharia) that does not mandate war against non-muslims (jihad) until the entire world is subjugated under sharia?

Can you name one Islamic school text for children that discusses jihad that does not identify jihad as one of the three duties of all muslims? 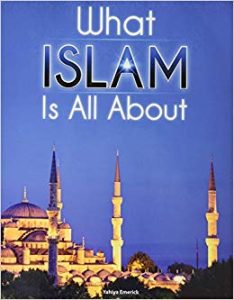 “The duty of muslim citizens is to be loyal to the Islamic State.”  What Islam is All About

When UTT teaches Islam, we use the same books used in mosques and Islamic schools all over Texas, including inside the Islamic prayer room at the Taylor Chapel on Goodfellow Air Force Base in San Angelo, Texas.

It is okay for muslims to teach other muslims they must wage war against the non-muslims until the world is under sharia, but when UTT teaches that is what muslims teach it is somehow bigoted?