The Foundation of America Cannot Be Compromised

America has so strayed from its bedrock foundation, that simple discussions and policies seem complicated by the emotions of the day, people’s perspective, and a host of ideas swirling about our social and political world today.

Yet when we look at the world through the lens of our founding principles, we come to the quick realization that “compromise” cannot be reached with those who seek to implement rules, systems, and laws which undermine these founding principles.  These people are called enemies and must be defeated. 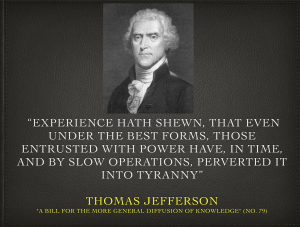 Because our schools have done such a poor job of teaching what was common knowledge among young children a hundred years ago, many of our citizens have little grasp of the basic unyielding principles that ensure our liberty and, therefore, our prosperity.

In today’s America:  Presidential candidate Mrs. Clinton has to answer questions about the killing of the U.S. Ambassador in Benghazi, Libya; jihadi armies are moving across the Middle East, Africa and elsewhere; the President of the United States and his State Department are negotiating with the number one state sponsor of terrorism on the planet – Iran; U.S. leadership has surrendered Syria and the greater Middle East to Russia, and therefore Iran and China; U.S. Islamic organizations are intimately involved in National Security matters despite the fact they are Hamas/Muslim Brotherhood front groups; America stands over $20 trillion in debt; an avowed Socialist is running for President (unconstitutional); this Administration continues to abuse the power of the Executive branch while Congress still talks of “compromise” and “coming together”; and on it goes.

There are over 1.2 million abortions in America every year which are granted “legal” status by a Supreme Court ruling, and not by the Legislative branch of the federal government.  Businesses and individuals who stand firm against homosexual marriages in their private and public lives are finding the weight of the federal government coming down on them.

All of these issues seem divergent and unrelated, yet they represent the predictable outcome of a nation which strays far from its founding.  Our Ideals are found in the Declaration of Independence which states:

“When in the Course of human events, it becomes necessary for one people to dissolve the political bands which have connected them with another, and to assume among the powers of the earth, the separate and equal station to which the Laws of Nature and of Nature’s God entitle them…”

The foundation out of which our nation was born has a standard – The Law of Nature and the Law of God.

The right to defend oneself, the argument against homosexuality, the right to liberty, and many other self-evident truths all exist in the Law of Nature.  There is no slavery in nature.  The places we find homosexuality in nature are aberrations not the rule.  Defending yourself is the rule in nature – try to approach new born puppies, bears, or some other animal and see how the mother defends her own.

The Law of God naturally confirms what we see in nature, but where the Law of Nature in not clear, we look to the Law of God – the Bible.  Not only do we see where incest, rape, and other foul acts are unlawful, we see how governments are to be established ensuring sovereignty and authority are not shared.  God’s sovereignty is God’s.  Man’s is man’s.

“We hold these truths to be self-evident, that all men are created equal, that they are endowed by their Creator with certain unalienable Rights, that among these are Life, Liberty and the pursuit of Happiness.”

When America’s founders designed a nation like no other in human history, they did so by declaring self-evident truths – all human beings are created equally by God born with unalienable rights.  Unalienable rights come from God and, therefore, cannot be taken away by the government, a majority vote, or any other maneuver of the people.  The Declaration does not list all of the unalienable rights God gives us, but those can be found elsewhere including in the Bill of Rights.

FIRST, God gives us the right to life.  Because this right comes from God, no government, nor any man can remove this right because it is a right that belongs to the sovereignty of God alone.  When we allow millions of the most innocent in our society who have objectively done no wrong to be killed, we are surrendering a God-given right to the government it neither has the authority nor capacity to hold.

Secondly, the founders declared we are all born free as children of God (Liberty).  The founders understood liberty is our birthright, and they also knew the weight of the Ideal of the Declaration would make it impossible for slavery to continue.  In the end, slavery was abolished in America, yet it continues in many nations across the globe today.

Finally, the third unalienable right mentioned in the Declaration is the right to property (“happiness”).  Of this right William Blackstone, whose legal writings were considered the final authority in American courts for over 150 years after the ratification of the Constitution, stated: “So great moreover is the regard of the law for private property that it will not authorize the least violation of it – no, not even for the general good of the whole community.” (Commentaries on the Laws of England (Philadelphia: Robert Bell, 1771), Vol. I, p. 139).

Yet, today we see the government taking people’s private property to create bike paths, townhouse complexes, or some other “need of the community.”

We as Americans enter into a social compact to surrender our right to self-government to form a government whose sole duty is to protect our unalienable rights – the rights God gave us.

“That to secure these rights, Governments are instituted among Men, deriving their just powers from the consent of the governed.”

Out of this framework came an American government rooted in Natural Law and the Bible.  From this place, our laws come.  Any laws contrary to Natural Law or the Bible are not valid laws.

From a society based in the rule of law and understanding it owes its life and liberty to God, comes prosperity.  It is no accident America is the most prosperous nation in the history of the world. 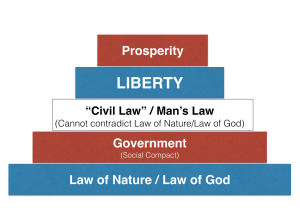 To pull the great foundational block of the Law of Nature and Nature’s God out from under America, is to destroy America and all that it is.  The natural outcome will be the kind of tyranny and despotism about which our Founding Fathers cautioned us.

For the younger generation, the result is Panem.  No cell phones, no video games, more rules, no freedom, and no joy.

The federal government in America at the political and bureaucratic level has failed to rule within its authority and has usurped God’s sovereignty as defined in our founding document.

There is no compromising with socialists, jihadists, communists, or marxists.  These are systems which enslave mankind and nullify the very principles upon which America was founded.

Our strategy must be one which is consistent with ensuring victory of future generations:  We win, they lose.

It is now up to the States and the people to stop the abuse of power of the federal level.