As everyone settles back into work and the daily routine after the Christmas and New Year’s break, UTT would like to give our readers a quick run down on a few jihadi incidents around the world and the United States in the last WEEK:

SPAIN
Four people were injured in Alaquas, Spain when a Moroccan muslim drove his vehicle on the sidewalk.
Police ruled out any links to terrorism because the driver was drunk at the time.
Lesson for jihadis – get drunk and then you can get away with jihad.

GERMANY
Berlin police called a Syrian muslim man “deranged” after he attacked several people with a knife “for no apparent reason” at a subway station on New Year’s Eve.  The assailant called one of his victims “infidel” before stabbing him.

AUSTRIA
Two muslims, aged 18 and 12 have been charged for plotting to bomb a Christmas market in Ludwigshafen, Austria in 2016.  According to reports, the 12 year old, at the direction of the 18 year old, made the nail-bomb which failed to detonate as planned.

IRELAND
An 18-yr-old muslim refugee killed a man and attacked two others in Dundalk, Ireland before attacking police.  Irish police are still trying to determine a motive.

ITALY
A 38 year old muslim refugee has been charged with attempting to rape a pregnant woman while she was in labor at the Sant’Eugenio Hospital in Rome.

SWEDEN
An explosion, from what is reported to be at least one hand grenade, ripped through a subway station in Stockholm, Sweden injuring at least two people.

ENGLAND
Recently released crime statistics reveal violent crimes in London, England have skyrocketed.  Murder rates are up over 27%, robberies are up over 33%, knife crimes rose over 31%, and rapes are up over 18%.
The mayor of London is a sharia-adherent muslim who has publicly stated England needs to learn to live with this kind of behavior from muslims.

VERMONT (UNITED STATES)
A muslim man with a machete seriously injured an elderly lady while she was delivering meals to poor people.

NEW YORK, NY
Authorities in New York are reportedly investigating photographs of an Islamic State recruit/supporter near the Metropolitan Museum of Art. 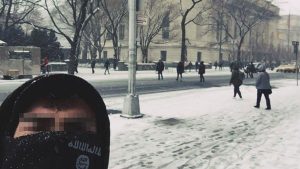 Instead of spending the time and effort to shut down and bulldoze jihadi organizations and arrest Islamic leaders, officials in NYC announced the city is going to spend $50 million on “security infrastructure.”

2. Hamas doing business as the Council on American Islamic Relations (CAIR) still has its headquarters two (2) blocks from U.S. House of Representative offices in Washington, D.C. and CAIR has still not been indicted for conspiring to commit terrorism, conspiring to overthrow the United States or any other crime for which abundant evidence exists.  Terrorist walking free in suits in the nation’s capital.