The Jihadi Shadow Government in America

The Jihadi Shadow Government in America

“Phase Two:  Phase of gradual appearance on the public scene…infiltrating various sectors of the Government…Establishing a shadow government (secret) within the Government.”

The purpose of the Islamic Movement’s establishment of a “shadow government” inside the U.S. government is two-fold:  first, to influence decision-making as it relates to Islam and the “war on terror”; and secondly, to gather intelligence.

A declassified FBI confidential informant (CI) report dated 8/17/1988, details the Muslim Brotherhood’s activities in the United States  at the time and states:  “(CI) has advised that the Ikhwan is a secret Muslim organization that has unlimited funds and is extremely well organized in the United States to the point where it has set up political action front groups with no traceable ties to the IIIT or its various Muslim groups. They also have claimed success in infiltrating the United States government…the IIIT leadership has indicated that in this phase their organization needs to peacefully get inside the United States Government and also American universities.  (CI) noted that the ultimate goal of the Islamic Revolution is the overthrow of all non-Islamic governments.” 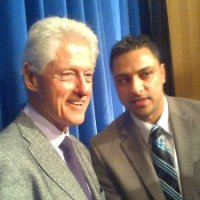 It was reported last week that three Muslim brothers – Abid, Imran, and Jamal Awan – who have been working IT on Capitol Hill, were fired in the last 10 days because they allegedly accessed computer systems of Members of Congress without authorization.  Another brother and a sister in the Awan family are also apparently under investigation in this same case.

An FBI press release dated 11/13/2007 reveals:  Nada Nadim Prouty, a 37-year-old Lebanese national and resident of Vienna, VA, pleaded guilty today in the Eastern District of Michigan to charges of fraudulently obtaining U.S. citizenship, which she later used to gain employment at the FBI and CIA; accessing a federal computer system to unlawfully query information about her relatives and the terrorist organization Hizballah; and conspiracy to defraud the United States.”  To be clear, Prouty was an active CIA case officer and former FBI Special Agent whose immediate family were personally close to senior Hizbollah leaders.

In April 2008, a Muslim police officer, Sergeant Weiss Rasool with the Fairfax County (VA) Police Department, was sentenced in federal court for illegally using the FBI’s National Crime Information Center database to see if he and others with whom he was acquainted were on the Terrorist Offender list.  He also discovered one of his friends was under FBI investigation in a terrorism matter and tipped him off prior to the FBI raid.

While working undercover as an intern at the headquarters office for Hamas (doing business as the Council on American Islamic Relations – CAIR) in Washington, D.C., UTT’s own Chris Gaubatz unearthed a memo revealing the Hamas entity was working to influence “judiciary, intelligence, and homeland security committees” (Council on American-Islamic Relations 2007-2008 Strategic Plan).

Following these revelations, in October 2009, Congresswoman Sue Myrick (NC) called for investigations into the Hamas (CAIR) plan to put Muslims inside committees and on staffs to influence and gather intelligence.  Democrats came to the defense of Hamas/CAIR (Conyers, Honda, Velazquez, Lee).

None of this should be shocking to us.  In the Tafsir – the authoritative book of Islamic law which legally defines every verse in the Koran – Koranic verse 9:5 (“Fight and slay the unbelievers wherever you find them…”) is legally defined as follows:

“…besiege them, and lie in wait for them in each and every ambush, do not wait until you find them. Rather, seek and besiege them in their areas and forts, gather intelligence about them in the various roads and fairways so that what is made wide looks ever smaller to them.  This way, they will have no choice, but to die or embrace Islam.”  (Tafsir, Ibn Kathir)

Suit-wearing jihadis portray themselves as friends wanting to be helpful.  The facts reveal a very different picture.  There is an ongoing effort to penetrate the U.S. government by the Islamic Movement, and there is evidence readily available this effort has been very successful to date.  Efforts by those wanting to protect and defend the Republic are repudiated for doing so by people who should be batting for the home team. The influence operations and intelligence gathering by our enemy is effective.

To rip our enemies out of the many places they have lodged themselves in the government system will be a significant endeavor.  Americans must brace themselves as these efforts begin, because the hard-left marxists and jihadist will portray themselves as victims and our the leaders of the new administration as the “bad guys.”  There will much wailing and nashing of teeth worthy of Academy awards.

We are at war, but a large part of the war will not be fought on the battlefield with tanks, artillery and infantry.  It will be fought in the media, on Capitol Hill, and in town halls across this nation.  Citizens must know and understand the threat if we are to be victorious.