The Media’s Incoherent Reporting on the U.S. Muslim Brotherhood

The Media’s Incoherent Reporting on the U.S. Muslim Brotherhood

Last week’s unprofessional and nonsensical article in the Atlantic demonstrates the media will avoid evidence and facts at all costs to defend terrorists and apologize for the Global Islamic Movement.

The bright side of the American media’s collusion with our enemies is that they are so overwhelmingly stupid, they expose themselves, making it easy on the rest of us.

An excellent exemplar is NPR’s recent radio program “All Things Considered” which attempts to minimize the Muslim Brotherhood’s presence in America while revealing they are present here in their title:  “Push To Name Muslim Brotherhood A Terrorist Group Worries U.S. Offshoots.”

At the 46 second mark of the radio program, NPR “reporter” Tom Gjelten reports from the Dar al Hijra Islamic Center in Falls Church, Virginia and admits it was founded by the Muslim Brotherhood (MB).  He goes on to say the Muslim Brothers fled Egypt because they were being “persecuted.”

From shortly after the MB’s founding, Muslim Brothers were being arrested and executed by the Egyptian government – and still are today – because they were bombing judicial offices, assassinating the leaders of Egypt (including the 1948 assassination of the Prime Minister by a Muslim Brother followed by Egyptian security services killing Muslim Brotherhood founder Hassan al Banna on the streets of Cairo in 1949), attacking British soldiers and their families in Egypt, and plotting to overthrow the Egyptian government for not fully implementing sharia (Islamic Law).

There is a significant difference between “persecution” and “revolution.”

Gjelten then interviews Imam Johari Abdul-Malik of the Hamas/Muslim Brotherhood’s Dar al Hijra Islamic Center (mosque) in Falls Church, Virginia who is actually more honest than NPR when he says: “When (Muslim Brothers) realized that they weren’t going (back to Egypt) they built new entities in America that would incorporate those values that they had and, at the same time, lobby to make sure that America continued to be the ally of muslims in Africa, Asia, and the Middle East.”

What are the MB’s “values?”

The MB’s founder, Hassan al Banna said:  ““It is the nature of Islam to dominate, not to be dominated, to impose its law on all nations and to extend its power to the entire planet.”

The Muslim Brotherhood’s official By-Laws can be found here at the UTT website, and they state:

“The Muslim Brotherhood is an international Muslim body which seeks to establish Allah’s law in the land…The Islamic nation must be fully prepared to fight the tyrants and the enemies of Allah as a prelude to establishing an Islamic state.”

The MB By-Laws also state the way the MB achieves the above-mentioned objectives is to “Make every effort for the establishment of educational, social, economic and scientific institutions and the establishment of mosques, schools, clinics, shelters, clubs as well as the formation of committees to regulate zakat affairs and alms.”

They continue to build them today to fulfill their objective – to create an Islamic State under sharia (Islamic Law).  This is the same objective, by the way, of ISIS and Al Qaeda.

The NPR interview continues and Imam Abdul-Malik tells NPR he has asked Muslim Brotherhood leaders in America “Are most of the organizations that were established by you guys rooted in the ideologies of your student movement from back home?  Most of them (say):  ‘I don’t want to answer the question.'”

That says it all.

What else are core Muslim Brotherhood beliefs as revealed in their doctrine?

The Muslim Brotherhood logo is below.

The Arabic writing under the two swords (clue) is translated into English as “make ready” which is a direct reference to Chapter 8, verse 60 from the Koran:  “Against them make ready your strength to the utmost of your power, including steeds of war, to strike terror into (the hearts of) the enemies, of Allah and your enemies, and others besides, whom ye may not know, but whom Allah doth know.”

The Muslim Brotherhood Creed is:  “Allah is our goal; the Messenger is our guide: the Koran is our law; Jihad is our way; and martyrdom in the way of Allah our inspiration.”

In 2005, the Supreme Guide (Global Leader) of the International Muslim Brotherhood Mohammed Akef said, “The Muslim Brotherhood is a global movement whose members cooperate with each other throughout the world, based on the same religious worldview – the spread of Islam, until it rules the world.” (Asharq al-Aswat interview, 12/11/2005)

The Supreme Guide of the MB from 2010 until his arrest in 2013, Mohammed Badie, was sentenced to death in Egypt for inciting the revolution there among numerous other charges for which he has also been sentence to life in prison.

This NPR report admits that evidence from federal investigations reveals a “humongous” network in the United States “clearly linked to the Brotherhood…”  Then, illogically, Gjelten states that by not answering the questions about the MB’s involvement in the U.S. Islamic community, U.S. Islamic leaders “leave the story largely to those who portray the Brotherhood in exaggerated conspiratorial terms.  That makes it harder to separate suspicious financial links to benign ones.”

If the self-evident information about the Muslim Brotherhood’s objectives and their guiding principles as stated by their leaders is not enough to ignite the brain cells in NPR’s reporters, UTT is not sure what will.

Oddly enough, in the online article of this radio report (which can be found here), the second paragraph reads:  “The movement has so far pushed that agenda only in Muslim-majority countries, but some critics now claim — without evidence — that it is doing the same in the United States.”

Since NPR itself identifies the Muslim Brotherhood as founders of many of the Islamic organizations in the United States, the only question to be answered is:  “Are they doing the same thing in America they are doing in the rest of the world?”

The evidence in the largest terrorism financing and Hamas trial ever successfully prosecuted in American history (US v Holy Land Foundation for Relief and Development (HLF), Dallas 2008) was collected by the FBI during their 15 year investigation into Hamas in the United States and its front organizations.

The evidence in the HLF trial revealed, as NPR reported, there exists in America a massive Islamic network controlled primarily by the Muslim Brotherhood whose stated purpose is to wage “civilization jihad” to destroy America, overthrow it’s government and replace it with an Islamic state under sharia.  This conspiracy includes all of the prominent Islamic organizations in America.

As a matter of act, at the time it was indicted HLF was the largest Islamic charity in America and it was a terrorist organizations – specifically, Hamas.  [Note: this is called an “Investigative Clue” there is a problem here in America]

The case was adjudicated in 2008 and HLF and its leaders were convicted for being terrorists (Hamas leaders).  The last hearings on this matter were approximately one year ago so those who say HLF is “old news” are simply wrong or lying.

The HLF evidence, as confirmed by the Department of Justice filings, also reveal the largest Islamic organization in North America – the Islamic Society of North America (ISNA) – as well as the North American Islamic Trust (NAIT), are not only Muslim Brotherhood entities but directly fund Hamas, a designated Foreign Terrorist Organization, in violation of U.S. Federal Law.

The HLF evidence also reveals, and the Department of Justice filings confirm, the Council on American Islamic Relations (CAIR) was created by the U.S. Muslim Brotherhood’s Palestine Committee which is Hamas in the United States.  Did we mention Hamas is a designated TERRORIST organization?

The leader/founder/board member of nearly two dozen of the largest Islamic organizations in North America was Abdurahman Alamoudi, who was a financier for Al Qaeda and now sits in federal prison.

All of these are called “Investigative Clues” that the Muslim Brotherhood is “bad” and is doing “bad things” here in America – right now. 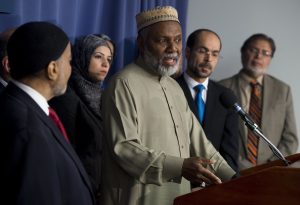 The Muslim Brotherhood presents a clear and present danger to the United States and its citizens.  The MB network in America should be disintegrated by the U.S. government and its leaders killed or captured.

We can only hope the new administration will lay the hammer down on these suit-wearing jihadis.

UTT continues to strongly encourage local and state law enforcement to ready themselves for dealing with this enemy at the local level.  This requires a deep understanding of this problem for the law enforcement officer on the street who bumps into these jihadis on a daily basis.