The OSCE and the International Assault on Free Speech

The war against the Islamic and Marxist Movements inside the United States is primarily a war of narratives.  As UTT continues to emphasize, the primary line of effort against a false narrative is to speak truth boldly using specifically defined language that is understood by all those on our side. 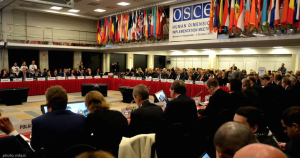 At the international level, the OSCE (Organization for Security and Co-operation in Europe), a massive international organization with real diplomatic functions, is one of several international bodies working to destroy free speech.  The OSCE calls for an end to Islamophobia and criminal punishments for those make Islamophobic statements.  Yet OSCE leadership publicly admitted at their 2013 conference in Warsaw, Poland there is no formal definition for “Islamophobia.”

Needless to say, the criminalization of Islamophobia – ie the imposition of the Islamic law of slander – was initiated by the Organisation of Islamic Cooperation’s (OIC) 2005 10-Year Plan.  The OIC is made up of all 57 Islamic member states.

It is worth noting the OSCE also stated speech that is factually correct, can still constitute hate speech, and individuals can still be punished for it.