The Political Left’s Marriage to the Islamic Jihad: Culture of Death

In this second of a 4-part series on The Political Left’s Marriage to the Islamic Jihad, we will explore the Culture of Death that pervades both ideologies at their core.

Let us begin with the fact that the Political Left is responsible for more murders in the last 90 years than all other ideologies combined, including the Islamic Jihad.  From Vladamir Lenin to Mao Zedung to Pol Pot to Adolf Hitler to Josef Stalin the communists and socialists in the 20th century killed tens of millions of people – in brutal and barbaric ways.

Elites on the Political Left will say these “extreme” examples of Stalin and Hitler are not related to their efforts to bring “equality” and “justice” to the average man and woman, and they would never support such treatment of people.  This soft-spoken language of socialism is no less dangerous because it lays the foundation for the likes of Stalins and Hitlers, and has for over 90 years.

We must also begin with the fact that America was founded on the principle that God gave us our right to life and, therefore, each of us has value and dignity in the eyes of God.  This “unalienable right” as written by Thomas Jefferson in our Declaration of Independence, is defined in legal dictionaries in the 1800’s to mean “a right that could not be taken away from you even if you tried to give it up.”  When free people surrender the right to life in any manner, we surrender it for all of us.  Tyranny knows no boundaries.

The programs and policies of the Political Left (or “Progressives” if you will) give no heed to God and call for the extermination of the unwanted in society.  A notable data point is a darling of the Left, George Bernard Shaw, who acknowledges his support for the Hitler regime and for killing people who could not justify their existence.  In this video, Shaw says, “I think it would be a good thing to make everybody come before a properly appointed board…every five years…and say sir or madam, would you be kind enough to justify your existence.”  The implications of such a statement, and his broader comments on this matter, exemplify the mindset and darkness of the Political Left.

Whether it be  forced abortions (China) or the promotion of abortion in the United States to the tune of over 1.2 million children killed each year (and over 57 million since Roe v Wade), to programs which promote the killing of elderly who are past their functional use, mentally ill people, and the disabled, the Political Left has a recorded history of a willingness to kill unjustly.  One can think of few things more institutionally evil.

Putting cover phrases on euthanasia like “dying with dignity” does not minimize the effect on society by attempting to control when the lives of its citizens should end.

There is also a more subtle angle on the Left’s Culture of Death – their silence towards a Culture of Life.  From the 1600’s when pilgrims and settlers came to places like Plymouth and Jamestown, the Bible was the first and primary book used to teach children moral principles and guide them in their lives, and is also the moral guide Americans were admonished to follow by our Founders if this nation is to survive.  The New England Primer and other such books followed, which taught biblical principles to school children across this nation up through the 1930s.  Principles like “Love thy Neighbor” were taught to our children, and they learned their self-esteem came from knowing that the creator of the universe sees them and loves them, and, therefore, they have value.  In the 1930’s, the Progressives began working diligently to remove God from our classrooms and from the public square in direct contradiction to the ideals espoused in our Declaration, and against the legal framework of the Constitution.

By intentionally removing the principles which teach the dignity and importance of life, the Political Left made it easier for the Culture of Death to creep into our society.

The Political Left’s disconnect from reality cannot be discarded as an accelerant as we discuss this topic.  Just this week, State Department Spokeswoman Marie Harf stated on a television interview that ISIS can only be stopped if we get to the root cause of the problem (ISIS) – a lack of jobs.  This kind of soft-mindedness promotes the Culture of Death of the Islamic Movement (and others for that matter) because it intentionally refuses to address a massive threat to humans across the globe that is clear and present in our midst, and that has clearly identified itself.

That Culture of Death in Islam is not a difficult one to uncover.  There is no disagreement among the scholars of Islam that it is a permanent obligation upon the Muslim community to wage Jihad until the entire world is subordinated to Islamic Law (Sharia).  Islamic Law specifically calls for beheadings, stonings, crucifixions, and other such punishments.  Islam teaches – because Allah commanded it – that Muslims cannot take Jews and Christians for friends (Quran 5:51: “Take not the Jews and Christians as friends and protectors…”) – although they can pretend to befriend them if it suits a purpose – so hatred that energizes the violence is a part of this ideology as well.

And all of this is taught at the first grade level in Islamic schools around the world today.

The Jihadis teach toddlers to hate and kill non-Muslims for the sake of Allah.  In this video a small girl speaks succinctly about her hatred for the Jews.  In Iran, huge crowds chant “Death to America.”

But the more compelling evidence is in the reality of what we see on the ground level daily, and the example of the Islamic prophet Mohammad.  Across the globe the world witnesses Islamic Jihadis beheading children and putting their heads on stakes, burning people alive, burying women up to their chests and stoning them to death, and similar barbaric behavior.  And the Muslim world, for the most part, is silent. 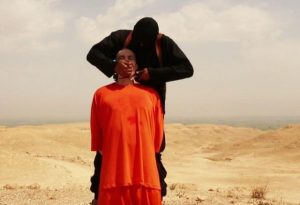 The silence we hear is the silence of consent because this behavior is directly supported in the Quran and by the example of the prophet Mohammad.  Mohammad himself cut the heads off of Jews at the Battle of the Trench, instructed his followers to kill anyone who slanders Islam, taught that the Jews and Christians are the enemies of Islam, and called for Jihad until Islam rules the world.

The behavior we are witnessing by ISIS and other jihadi groups is a part of the Culture of Death in the Islamic Movement, and it finds common ground with the Progressives on the Political Left.

The Left must not be aware that when the Caliphate is established, the Muslims will kill them first.