On August 20, 2004, Ismail Elbarasse and his family were traveling on the Chesapeake Bay Bridge in Maryland.  A law enforcement officer driving on the Bay Bridge at the time drove passed Elbarasse and noticed the middle eastern female passenger filming the support structures of the bridge.  She pulled the camera down quickly when she noticed the police officers vehicle, and resumed filming as he drove by. 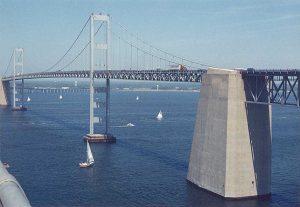 Upon stopping the vehicle and identifying the passengers, the police identified the driver as Elbarasse, who was wanted on a Material Witness Warrant in a Hamas case in Chicago.

The FBI case agent would later write in the search warrant affidavit for Elbarasse’s residence that it was his assessment Elbarasse was filming the bridge in support of a possible Al Qaeda operation to destroy the bridge.

The affidavit states:  “On the basis of the foregoing I have reason to believe that Elbarasse and his wife have been engaged in violations of Title 18, United States Code, Section 2339B in that they were providing material support, to wit reconnaissance and surveillance, to a foreign terrorist organization.”

As it turns out, Elbarasse was a member of the Board of Directors of the U.S. Muslim Brotherhood and a senior Hamas official in the United States.  He worked directly with Musa abu Marzook, the leader of the U.S. Palestine Committee, which is Hamas America.  Numerous financial transactions tie Elbarasse to Hamas and monies going to fund Hamas overseas.

Hamas is an inherent part of the Muslim Brotherhood.

Elbarasse fled the country and his whereabouts are not known.

A large amount of the evidence found at the Elbarasse residence was entered as evidence in the US v Holy Land Foundation for Relief and Development trial (Dallas, 2008) – the largest terrorism financing and Hamas trial ever successfully prosecuted in American history.

The totality of the evidence in the HLF trial, including the Elbarasse evidence as well as testimony and a large amount of other evidence from this fifteen (15) year FBI investigation, revealed there is a massive Hamas/Muslim Brotherhood network in the United States comprised of the most prominent Islamic organizations here.  The objective of this Movement is to wage Civilization Jihad until the United States is an Islamic State under Sharia.

Sadly, besides the Holy Land Foundation, all of the other organizations identified as Muslim Brotherhood and Hamas organizations from this evidence, like the Council on American Islamic Relations (CAIR), the Islamic Society of North America (ISNA), the Muslim Students Association (MSA), and so many others are still in operation.

As a matter of fact they are being defended by our Secretary of Homeland Security, the Attorney General, and the President of the United States. 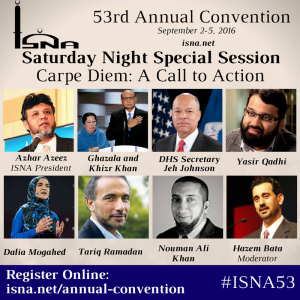 DHS Secretary Jeh Johnson speaks at the ISNA Conference with a host of jihadis in September 2016.  ISNA is the largest MB organization in North America which raises money for Hamas, a designated terrorist organization.