Throwback Thursday: Hillary’s Work for Our Enemies at the OIC

The Organisation of Islamic Cooperation (OIC) is the largest voting bloc in the United Nations (UN), and is comprised of all Islamic States on the planet – 56 states plus Palestine which they consider an equal.

The OIC is considered the “Collective Voice of the Muslim World.”

In 1993, the OIC officially served the Cairo Declaration to the UN.  It was approved by the Heads of State and Kings of the Islamic nations in the world.

The Cairo Declaration begins with:

“Recognizing the importance of issuing a Document on Human Rights in Islam that will serve as a guide for Member states in all aspects of life.”

The Cairo Declaration ends with:

ARTICLE 24:  All the rights and freedoms stipulated in this Declaration are subject to the Islamic Shari’ah.

ARTICLE 25:  The Islamic Shari’ah is the only source of reference for the explanation or clarification of any of the articles of this Declaration.

At the Head of State and King level, the entire Muslim world under the OIC legally told the world that “Human Rights” in the Muslim world is defined by sharia (Islamic law).  Meaning:  killing those who leave Islam, homosexuals, and those who fail to convert or submit to Islam is all a part of the Islamic understanding of “human rights.”

The OIC “Ten Year Programme of Action” (2005) calls for governments of the world to Combat Islamophobia, which is hammer to implement the Islamic law of Slander (“To say anything about a Muslim he would dislike”).  Slander in Islam is a capital crime.

“Endeavor to have the United Nations adopt an international resolution to counter Islamophobia, and call upon all States to enact laws to counter it, including deterrent punishments.” (emphasis added)

UN Resolution 1618, approved in March 2011, is a non-binding resolution which calls on governments to outlaw all speech that “constitutes incitement to discrimination, hostility or violence” toward religion, on the rationale that such speech could provoke “religious hatred” in direct conflict with the U.S. Constitution and Federal Code.

Who advocated on behalf of the OIC for silencing “Islamophobia?”  Mrs. Clinton. 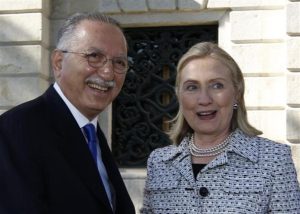 On July 15, 2011, Secretary of State Hillary Clinton, speaking to the OIC in Istanbul, Turkey stated:  “I want to applaud the Organization of Islamic Conference and the European Union for helping pass Resolution 1618 at the Human Rights Council…So we are focused on promoting interfaith education and collaboration, enforcing anti-discrimination laws, protecting the rights of all people to worship as they choose, and to use some old-fashioned techniques of peer pressure and shaming, so that people don’t feel that they have the support to do what we abhor.”

In December 2011, Secretary of State Hillary Clinton made the “Istanbul Process” a major initiative and partnered with the OIC to directly support UN Resolution 1618.

Hillary Clinton is, therefore, officially on record as supporting the implementation of sharia (Islamic Law) over the Constitution and U.S. Federal Code, and silencing all those who speak up about the dangers of Islam and sharia.