How much treasonous and traitorous behavior must Americans endure from our leaders? 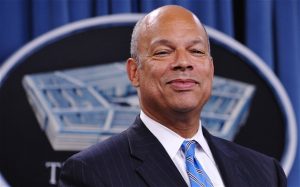 Moreover, the Executive Director of the ADAMS Center – Imam Mohamed Magid – is the outgoing President of the Islamic Society of North America (ISNA), identified by the Department of Justice and FBI as the “nucleus” for the Muslim Brotherhood’s Movement in America and a funding support entity for Hamas, a designated terrorist organization.

ADAMS also states on their website that 1/8 of all the Zakat they collect goes to JIHAD…terrorism.

And this is the place the Secretary of Homeland Security has decided to go to talk about the “civil rights” of Muslims.

At what point do we collectively realize leaders like this cannot claim ignorance of the enemy at this level. Therefore, a rational person would surmise Secretary Johnson is aware ISNA and ADAMS are enemy entities, yet he is going to provide support to them none-the-less.

In these times, Americans have a number of enemies.  In this case, there is the identifiable jihadi threat from organizations like ISNA, NAIT, MPAC, CAIR and so many others.  The enemy also includes senior government officials like Secretary Johnson who is aiding and abetting a Hamas support entity whose doctrine states it is waging “civilization jihad” against us to “destroy America from within” in order to establish and Islamic state under Sharia (Islamic Law).

Seems like that Mr. Johnson’s continued efforts to protect and support enemies of the United States meets the legal criteria of Treason, much like his colleague in the Attorney General’s office.