President Trump is demonstrating strength by standing firm against Turkey’s President Recep Erdogan who refuses to release U.S. citizen and pastor Andrew Brunson, held in prison in Turkey since April of 2016. 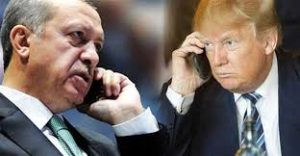 In fact, Gulen himself is a jihadi leader, and his Gulen and Harmony schools across the U.S. are a part of an Islamic criminal enterprise.

Turkey’s President Erdogan is aggressively pursuing a consolidation of power both in Turkey, the broader Islamic world, and inside the United States as he works diligently to take the reigns of the U.S. Islamic Movement and to become the next Caliph when the Islamic Caliphate is declared in the near future.

The Global Islamic Movement views the West’s leaders – who have pandered to Islam’s demands – as submissive and cowardly.

President Trump is in an extremely small group of world leaders willing to take a stand.  Turkey is positioning itself to, once again, be the center of the Islamic Caliphate which existed for over 1300 years until the early 1920’s, when the first leader of the nation-state Turkey, Mustafa Kemal, abolished the caliphate under sharia, and built a secular Turkey.

President Erdogan is positioning himself to be the next Caliph.

Neither Erdogan nor Gulen are allies of the U.S.  They are both sharia adherent muslims (jihadis) who have animosity towards each other.  That does not make either a friend.

Victory for America in this war begins with Understanding the Threat, and recognizing the root of the war against the West is Islam.