On Thursday December 3rd, U.S. Attorney General Loretta Lynch, the Chief Law Enforcement officer in America, stood on a jihadi platform (Muslim Advocates) in Virginia and announced she stands with jihadis against speech which offends Islam.  She also affirmed her Civil Rights office will investigate the arrest of Ahmed Mohamed in Irving, Texas. 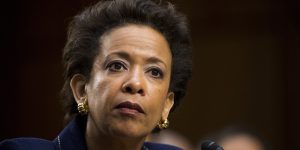 This entire action needs to be understood from the perspective of the enemy’s Information Operations which jihadis say is the primary focus of all of their actions.

In 2005, the current leader of Al Qaeda Ayman al Zawahiri said, “I say to you: that we are in a battle, and that more than half of this battle is taking place in the battlefield of the media.”  If we look at how Hamas makes propaganda and media operations the center of all they do, it will begin to reveal the purpose behind many of their domestic actions here.

In their jihadi operations in the U.S., the Muslim Brotherhood/Hamas gets American leaders to do their bidding for them in keeping with their strategic plan to wage “Civilization Jihad” by OUR hands.

The events surrounding Attorney General Lynch’s actions are in line with this strategy.

First, the Attorney General of the United States agreed to attend a dinner hosted by the group Muslim Advocates who are directly aligned with the U.S. Muslim Brotherhood – specifically the Islamic Society of North America (ISNA), the Muslim Public Affairs Council (MPAC), and Hamas (dba the Council on American Islamic Relations or CAIR).

She is providing overt approval of this jihadi group in her official capacity.  For this alone she can be removed from her position as AG.

IRVING, TEXAS:  Ahmed Mohamed, a 14 year old Muslim, was arrested by Irving (TX) Police after he was belligerent and evasive in answering questions by police who were called to his school by concerned school officials because of a device he brought in to class Mohamed claimed was a homemade clock.  As UTT has reported, this entire event was an information operation led by Hamas (dba CAIR). 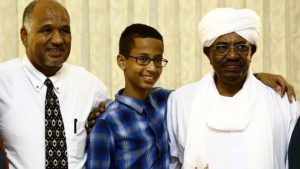 The meeting with Ahmed Mohamed and his father with war criminal Omar al Bashir in Sudan should be the clue that something is amiss with this “innocent inventor” of clocks.

DOJ will Enforce Islamic Law of Slander:  Attorney General Lynch stated at Thursday night’s dinner, “Know, please know, that the Department of Justice and this Attorney General will be your partner in that effort.”  She was referring to silencing criticism of Islam.  By speaking this at a jihadi function, the AG has sided with America’s enemies to silence legitimate security concerns Americans have about Islamic organizations here in the U.S., including Muslim Advocates.

For Americans, the results of this policy and attitude by the federal government are dangerous and violate the law.

Police who do their duties will be investigated by DoJ when the perpetrators are Muslims, especially when they are part of a terrorist operation run by groups like Hamas (dba CAIR).

When Americans call police or report suspicious behavior, they will be aggressively pursued by the federal government.

If you want to know why military officers never reported the behavior of Major Nidal Malik Hassan (Ft Hood Jihadi), why FBI agents remove their shoes before affecting arrests of Muslims in Mosques, and why neighbors of Syed Farook (San Bernadino Jihadi) never called police – this is why.

It appears as if the federal government wants a direct confrontation with itself and American citizens who clearly see that they (federal government) are aiding and abetting our enemies in violation of federal law and their Oaths of Office.