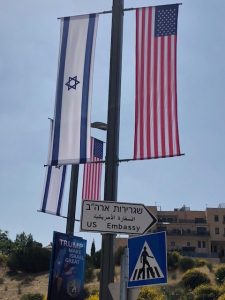 The UTT team returned to the United States Tuesday night after spending nine days in Israel.  While in Israel, UTT experienced the Iranian missile attacks, Jerusalem Day, Israel’s 70th anniversary, the U.S. Embassy move to Jerusalem, and the violence against Israel from Hamas/Muslim Brotherhood as a result of the U.S. Embassy move from Tel Aviv to Israel’s capital.

It was an incredible time to be in Israel to say the least.

Israel’s defensive posture stands in stark contrast to it’s Islamic neighbors who historically wage war against it and call for Israel’s destruction.

Islamic forces frequently target civilian populations inside Israel, as evidenced by current attacks on Sderot, a community within eyesight of Gaza which is consistently targeted by Hamas. 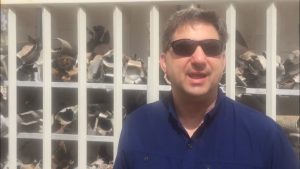 UTT’s President John Guandolo reporting from Sderot, Israel last week. Behind him are remnants of hundreds of missiles fired into this civilian community by Hamas from inside Gaza

Currently, Gaza is on fire because Hamas has opened a war with Israel.  How else can this engagement be described other than as a “Shooting War” with over 50 Hamas operatives killed and 2000 people wounded?

It is worth noting that despite the cries for a “Two State Solution” there already is a “second state” in Israel – its called Gaza.  Originally under control of the Palestinian Authority (PA) and now controlled by Hamas, Gaza pumps sewage into the sea, has a few hours of electricity a day, and is a “nation” in shambles.

This is what you get when jihadis (“terrorists”) want to run a nation-state.

What better way for the PA and Hamas to take the focus off their own continued failure than to attack Israel.

But there is a deeper reason why Islamic nations make Israel the focus of their hatred – Islamic doctrine/sharia commands it.

But Islamic doctrine reveals Islam has a special hatred for Jews.

The Koran calls Mohammad a “beautiful pattern of conduct” for muslims to follow (33:21).  In the most authoritative report of what Mohammad said, he informs muslims the day of judgment will not come until muslims kill the jews (Bukhari 2926).

Several Islamic Imams in the United States have recently been caught teaching this Bukhari hadith for the simple reason it is core Islamic doctrine spoken by Islam’s prophet.

Meanwhile, Israel’s restraint against its Islamic neighbors is astounding given the reality of the threats.

In a time when lovers of liberty and justice under law are hailing America’s move of its embassy from Tel Aviv to Jerusalem, Islamic forces lash out, send their women and children as fodder, and attack civilian communities inside Israel.

The contrast between Israel and their Islamic neighbors could not be more stark.  Israel fosters liberty and love of God, while using what little resources it has to advance its nation and create prosperity.

It’s Islamic neighbors call for Israels destruction and produce little other than a hatred of Israel merely because it is a Jewish state.

Leave a Reply to Wolf Woman