The new National Security Advisor – Lieutenant General Herbert Raymond McMaster – and the Counter-Terrorism advisor to the President of the United States – Sebastian Gorka – both unequivocally state the “terrorist” threat America faces has nothing to do with “true” Islam.

Both men are catastrophically wrong and, therefore, are leading America down a disastrous road towards defeat. 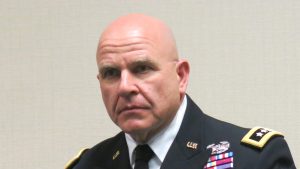 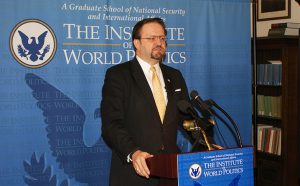 The New York Times, Guardian, and CNN all report Lt General McMaster told members of the National Security Council Thursday he felt “radical Islamic terrorism” was an unhelpful way to describe terrorism because becoming a terrorist is actually “un-Islamic” in the first place.

In a talk he gave at the Center for Strategic and International Studies in May 2016, LtGen McMaster said, “There is a cycle going on where groups like ISIL, who use this irreligious ideology, you know, this perverted interpretation of religion to justify violence, they depend on ignorance and the ability to recruit vulnerable segments of populations to foment hatred, then use that hatred to justify violence against innocents.”

This is incoherent and factually wrong.  LtGen McMaster wrote a book entitled “Dereliction of Duty.”  He may want to look in the mirror to see if he is doing the same thing in this war he accused President Johnson of doing in Vietnam.

100% of all Islamic doctrine, from elementary, junior high, and high school Islamic text books as well as the highest authorities in Islamic jurisprudence, to include Al Azhar University in Egypt, all clearly and doctrinally state Islam is a “complete way of life (social, cultural, political, military, religious)” governed by sharia (Islamic Law).  100% of all sharia mandates jihad until the world is under Islamic rule, and 100% of sharia only defines “jihad” as warfare against non-Muslims.

“The duty of the Muslim citizen is to be loyal to the Islamic state.”

What Islam is All About  (most widely used junior high text book in U.S. Islamic schools)

The violence Al Qaeda, ISIS, the Muslim Brotherhood, the Boston bombers, the attackers in Paris, the Fort Lauderdale shooter, and all the jihadis we have faced over the past 20 years quote authoritative Islamic doctrine in support of what they do.  Al Qaeda and ISIS have never misquoted sharia in furtherance of their actions.

In the last 15 years it has been made clear – the more muslims study Islam and sharia, the more likely they are to support and participate in jihad.

So the questions remains…what the hell is Lieutenant General McMaster talking about because he is not talking truthfully about a real and present danger to these United States?  He is doing exactly what our enemy wants him to do – creating an imaginary target for us to chase while our real enemy prepares to defeat us.

Nearly 16 years after 9/11, the Global Islamic Movement has taken down nations, expanded its power, and defeated the United States in the wars in Afghanistan and Iraq because leaders like McMaster decided they were too busy to stop and learn the enemy threat doctrine – Sharia – and instead have been given a counterfactual understanding of our enemy by Islamic advisors who are all batting for the other team.

The President’s Counterterrorism advisor, Sebastian Gorka, is “over the moon” LtGen McMaster is the new National Security Advisor.  However, Gorka’s lack of honesty about the Islamic threat raises much more serious questions.

Some have been lulled into believing he is on the right track because he uttered the word “jihad” but defeating this enemy takes more than pretending to know what you are talking about.

Speaking at CPAC this past weekend, Gorka stated:  “Zuhdi (Jasser) knows it better than anybody because he understands that this isn’t about poverty or lack of education. It’s about people who are fighting for the soul of Islam – not a war with Islam, but a war inside Islam; as King Abdullah, as General Sisi has said, for which version is going to win.”

Utter nonsense.  There is one version of Islam and one Sharia.  To say otherwise is to be factually wrong, but also dangerous when national strategies are being built off that utter nonsense.

Several years ago at a town hall presentation hosted by Washington, D.C. radio station WMAL, Sebastian Gorka stated “99.9% of muslims do not support terrorism (jihad)” despite a mountain of evidence and polling data proving this comment untrue, and the fact the entire purpose of Islam is to wage jihad until the world is dominated by Islamic rule (sharia).

No muslim jihadi who fought on the battlefields of Afghanistan, Iraq or anywhere else, nor any of the jihadis who have died in Europe in the United States attacking us nor the jihadis we have arrested have said they are “takfiri jihadis.”  They have said they are “Muslims” waging “Jihad in the cause of Allah” to “establish a caliphate under sharia.”

This is what Islamic doctrine commands them to do. 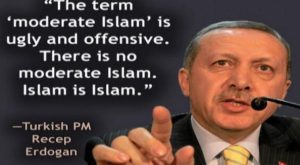 On page 144 of his book, Gorka ends with the call for the United States to spend billions of dollars supporting “Muslim reformers” in their “ideological war to delegitimize the message of holy war against the infidel and bolster modern interpretations of Islam.”  This demonstrates Sebastian Gorka is either completely free of any clue of Islamic doctrine or is intentionally lying about what Islam actually teaches.
Since these ideas and strategies to use “moderate Muslims” to ensure the “other version” of Islam wins are based in fantasy not reality, these policies will necessarily fail – and have failed the United States for 15 years.
Is that Dr. Gorka’s intention?  Does he not know that strategies to win a war must be based in the reality of who the enemy is?  Why would Sebastian Gorka put forth such and idea when he knows what he is saying is untrue?
Is it possible Dr. Gorka has remained strategically incoherent for 15 years during this global war?  Is he working on behalf of some outside entity to intentionally mislead the President of the United States, or is he is simply putting his paycheck ahead of the American people and his duty.
The United States will lose this war against the Global Islamic Movement if we do not clearly define the enemy and target the enemy.  We cannot hit a target we do not identify and cannot defeat an enemy we do not target.
Our warfighting doctrine calls for an analysis of our enemy based on how the enemy defines itself.  We begin our analysis there.  Something we have not done since 9/11/01.  If we did, our entire national security apparatus, including our military, would have been studying and teaching authoritative sharia and more of our soldiers, Marines, sailors, and airmen would be alive today because of it.
Keeping LtGen McMaster and Sebastian Gorka in their current positions will ensure America remains strategically incoherent and will guarantee our defeat in this war against the Global Islamic Movement.
As always, this war will be won or lost at the local level because our federal government is still failing us.
February 26, 2017
JG Al Azhar, al-taqiyya, Apostasy, CAIR, Cairo Declaration, Christian Persecution, Civilization Jihad, counterinsurgency, Counterintelligence, Designated Terrorist, Hamas, Hezbollah, History of Islam, Homegrown Jihad, honor killing, Information Warfare, Interfaith Outreach, International Muslim Brotherhood, Iran, ISIL, ISIS, Islamic Jurisprudence, Islamic Law, Islamism, ISNA, jihad, Jihadi Attacks, Law Enforcement, Mosque, Muslim Brotherhood, Muslim Mafia, NAIT, OIC, Organisation of Islamic Cooperation, Pakistan, Permissible Lying, Political Warfare, Propaganda, Radical Islam, Raising a Jihadi Generation, sharia, Stealth Jihad, Subversion, Ted Cruz, Terrorism, The Church and Islam, U.S. Military, United Nations, US Muslim Brotherhood, US Palestine Committee, USA v Holy Land Foundation, UTT, zakat Al Azhar, al qaeda, CPAC, Defeating Jihad, Gorka, ISIL, ISIS, Islam, jihad, McMaster, Michael Flynn, Muslim, National Security Advisor, President Trump, Sebastian Gorka, sharia, terrorism, Violence, White House, Zuhdi Jasser