U.S. warfighting doctrine requires military professionals to begin any analysis of a threat with WHO the enemy says they are and WHY they say they are fighting.  Since 9/11/01, the United States government has failed to do this.

Yet, 100% of the enemy we face – to include Al Qaeda, the Islamic State, Hamas, Hizbollah, the Muslim Brotherhood, all Islamic nations who are a party to the Organisation of Islamic Cooperation (OIC), and all of the jihadis who have been killed or captured on the battlefields of Afghanistan and Iraq as well as on the streets of Europe and America – say they are “muslims waging jihad to establish an Islamic State under sharia (Islamic law).”

As a matter of fact, several years ago at an event in Washington, D.C. UTT’s President John Guandolo was able to make this point to a 4-star general who agreed that knowing sharia “completely changes the nature of how we are fighting this war.”

Yet, no major strategic change took place anywhere in the military.

Our generals are too busy apologizing for our military (General John Allen), or condemning a U.S. citizen for burning a book (General David Petraeus).  If they spent more time teaching their troops what sharia is and what it says about warfighting – ie doing their jobs – we would have brought more troops home alive from Iraq and Afghanistan, and killed more of the enemy.

This happens to be the most frequent comment UTT receives from members of the military after participating in our 3-day training program.  They are furious when they realize that knowing sharia BEFORE they deployed would actually have saved lives and changed the way U.S. forces could have tactically fought battles.

On Labor Day 2018, America lost another good man.  Command Sergeant Major Timothy Bolyard was killed by an Afghan police officer.  A recipient of six (6) bronze star medals and a West Virginia native, Bolyard’s men praised him and were grateful for his leadership. 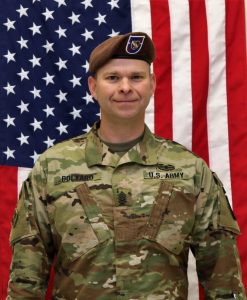 But Sergeant Major Bolyard, like thousands of other American fighting men, are no longer with us because America’s military leaders have failed to speak the truth about the nature of the war in which we have been engaged for nearly 17 years now.

The muslim Afghan police officer who killed Sergeant Major Bolyard acted lawfully under sharia.  Do our generals know this?  Should they know this?

Do criminal negligence laws pertain to generals who fail to know basic information about the enemy – which they are legally bound to know – which then leads to the deaths of American troops?