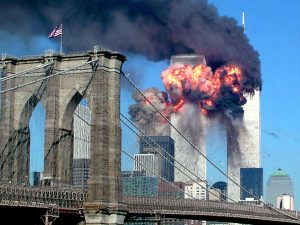 The attacks of 9/11 were conducted against the U.S. homeland with support from the Islamic Movement inside the United States.  The U.S. government’s response to fight on battlefields overseas, while leaders of the U.S. Islamic Movement exclusively provided “advice” to our leaders, led to strategic defeats in Afghanistan and Iraq despite the fact the U.S. military crushed the enemy on the battlefield.

Why?  How did this happen?

The United States lost and is losing this war today because, contrary to U.S. warfighting doctrine, the United States government has failed to identify the enemy we face and the doctrine they use as the basis for why they are fighting.

The enemy clearly articulates that sharia (Islamic Law) is the basis for everything they do.

Now the United States is re-engaging in Afghanistan using some of the same leaders who crafted the losing war strategy in the first place, who still have not defined the enemy, using the same allies who are still our enemies (eg Saudi Arabia, Pakistan, et al), while ignoring the massive jihadi network in the United States, which is the primary front for our enemy in this war.

After 9/11, President Bush stated the purpose for our operations in Afghanistan was to “make it more difficult for the terror network to train new recruits and coordinate their evil plans,” and that U.S. military actions are “designed to clear the way for sustained, comprehensive and relentless operations to drive them out and bring them to justice.”

During the entire Bush administration the United States never defined the enemy.  Yet, the administration and all key government agencies were primarily advised by Muslim Brotherhood leaders which led to the United States writing constitutions for Afghanistan and Iraq (2005) creating Islamic Republics under sharia (Islamic Law), thus achieving Al Qaeda’s objectives in those two countries.

That is when we lost the war.

In announcing renewed military operations in Afghanistan, President Trump stated the objectives of this endeavor include:  “Attacking our enemies, obliterating ISIS, crushing Al Qaeda, preventing the Taliban from taking over Afghanistan, and stopping mass terrorist attacks against America before they emerge.”

First, if we kill all ISIS fighters, the Global Islamic Movement will roll on.  This is bigger than merely ISIS, Al Qaeda and the Taliban.

As UTT reported on Monday in its article “US Islamic Movement Enters Final Stage” the U.S. Muslim Brotherhood and its allies INSIDE the United States are experiencing the culmination of six decades of work domestically to overthrow our nation.  At the same time, the State Department is meeting with representatives of Hamas doing business as the Council on American Islamic Relations (CAIR) which raises grave concerns.

Mr. Trump’s original instincts were correct.  He should stick with his gut.  We should not engage in Afghanistan as his National Security Advisor and others recommend.

This is a strategic distraction from the real war here at home.

The pattern we see between the U.S. government response after 9/11 and today are very similar:

Response:  U.S. fails to define the enemy in any of its national security documents. U.S. military attacks targets in Afghanistan, while using U.S. Muslim Brotherhood leaders as primary advisors on how to fight the war.

Result:  Strategic loses in Afghanistan and Iraq.  Significant gains for Islamic Movement inside the U.S.

Response:  U.S. fails to define the enemy in any of its national security documents.  National Security Advisor Herbert McMaster demonstrates no knowledge of enemy doctrine (sharia).  U.S. Launches renewed military operations in Afghanistan, while failing to pursue the MB and designate it a terrorist organization.  The U.S. government continues to allow the MB to operate in the open in the United States.

Result:  While the U.S. puts its strategic focus on Afghanistan, the cooperating Islamic and hard-left/Marxist Movements will achieve the intentional outcome of their campaign – increased civil disorder, chaos, and a high likelihood of open civil war.

The Islamic Movement in the United States includes over 3000 Islamic centers/mosques, over 800 Muslim Student Associations (MSA) on every major college/university campus, over 255 Islamic Societies, and many others as has been detailed in previous UTT reports.  Nearly all of the jihadi attacks on the United States in the last 16 years, including the attacks of 9/11, had direct support from this network.

The 9/11 attacks had direct support from Saudi Ambassador Prince Bandar.

If the United States government wants to thin the jihadi herd, as the President states is his desire, he can begin with dealing with the mothership of their Movement – the US Council of Muslim Organizations (USCMO) – and jihadi leaders inside America like Nihad Awad, Ibrahim Hooper, Oussama Jamal, Salam al Marayati, Mohamed Magid, Azhar Azeez, Javaid Siddiqi, Sayyid Syeed, Muzammil Siddiqi, and so many others, as well as those aiding and abetting them like the President of the Southern Poverty Law Center Richard Cohen and the entire SPLC, and Congressmen Keith Ellison and Andre Carson.