What Islam is All About, most widely used text book in U.S. Islamic junior high schools

Until the United States makes an affirmative decision to identify our enemy, know the enemy’s doctrine and strategy, and defeat the enemy, America will continue to lose ground in this war and eventually lose the Republic.

Last week’s UTT article “No Wider Plot” detailed the failure of U.S. officials to identify the Global Islamic Movement and its doctrine – sharia – as the basis for which all of the Islamic attacks around the world must be analyzed.  With that in mind, today we are going to unpack one way the enemy’s strategy is keeping U.S. leaders focused on everything but the problem.

The Global Islamic Movement’s key strategy in the West is “Civilization Jihad” by OUR hands.  That means they are waging a war using all means possible – combat power, political warfare, propaganda, economic warfare, cultural warfare, spiritual warfare, and the like.  There is a full-blown insurgency underway in America to destroy the United States from within (by OUR hands) using our leaders to do our enemy’s bidding.

When the United States Department of State wrote the constitutions for Iraq and Afghanistan creating Islamic republics under sharia (Islamic law) – thus fulfilling Al Qaeda’s objectives in those regions – that was Civilization Jihad by our hands.  Whether our leaders understood this or not is irrelevant from the enemy’s perspective. 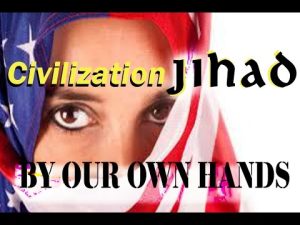 In the wake of a terrorist attack or a threat to the homeland, the desired course of action the enemy wants the U.S. government to take is to call for more money, authority, manpower, technology or anything else that keeps the focus off Islam.  The enemy wants our resources depleted and wants us looking inward for our failures instead of outward at them.  Civilization Jihad by OUR hands.

Jihadi attacks in Ft Lauderdale, Denver, New York, San Bernardino, Little Rock, Chattanooga, Orlando, Ft Hood, Columbus, Freemont, Minneapolis, and cities all over America are not happening because of a lack of the federal government’s legal authority, technology, money, or anything else.

These attacks are happening because the U.S. government denies the threat comes from within the Islamic community by people who are following the teachings of Islam.  The attacks are happening because jihadis are being protected by the Islamic community, and supported by the massive Muslim Brotherhood/Tabligi Jamaat network inside the United States which the federal government refuses to investigate and destroy.

This problem is further exacerbated when it can be demonstrated the exclusive “outreach partner” at the State Department, FBI, CIA, DHS, national security staffs, and elsewhere are suit-wearing jihadis – primarily Muslim Brotherhood leaders – who our leaders consider “okay” so long as they are non-violent now.

So long as the U.S. government fails to dismantle the Muslim Brotherhood/Tabligi networks here, there will continue to be an increase in domestic attacks with more American deaths, an increase in jihadi ideology being spread inside the United States, and muslims will continue to move towards their treasonous and seditious objective of overthrowing the U.S. government and replacing it with an Islamic State.

This is why UTT trains local and state law enforcement agencies, prosecutors, and others how to proactively locate jihadis in their areas, map out the jihadi networks, and investigatively use all means available to take the fight to this enemy.

This war will be won or lost at the local level by local police and the citizens who support them.

UTT works diligently to provide this information and these techniques to local and state officials because the federal government is failing to do its duty.