Abdurahman Alamoudi was considered the “pillar of the Muslim community” in Washington, D.C. 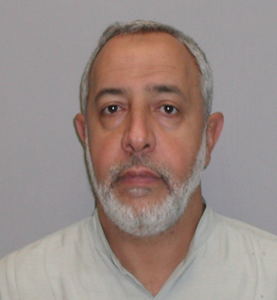 Abdurahman Alamoudi created and/or led nearly two dozen of the largest Islamic organizations in North America, was a “Good Will Ambassador” for the U.S. Department of State, created the Muslim Chaplain program for the Department of Defense, worked with the Department of Education to determine what went into American public school texts discussing Islam, and met with U.S. leaders across the spectrum.

And Abdurahman Alamoudi was a financier for Al Qaeda.

Alamoudi was arrested at London’s Heathrow Airport in 2003 with $340,000 cash he got from the Libyan government for the global jihad.  He said he found it outside his hotel room.  He was extradited to the Eastern District of Virginia (Alexandria) where he pled guilty to an 18 count indictment.

“In 2003, MIRA (Movement for Islamic Reform in Arabia) and (Al Qaeda affiliate Saad al) Faqih received approximately $1 million in funding through Abdulrahman Alamoudi. According to information available to the U.S. Government, the September 2003 arrest of Alamoudi was a severe blow to al Qaida, as Alamoudi had a close relationship with al Qaida and had raised money for al Qaida in the United States. In a 2004 plea agreement, Alamoudi admitted to his role in an assassination plot targeting the Crown Prince of Saudi Arabia and is currently serving a 23 year sentence.”

Alamoudi was also caught on video in 1999 speaking adjacent to the White House grounds publicly declaring he is a supporter of the designated Foreign Terrorist Organizations Hamas and Hizbollah – to the loud cheer of Muslims in attendance.

It should be noted this behavior did not get him fired from his positions inside the U.S. government.

Let’s review:  Abdurahman Alamoudi was the Islamic advisor to President Clinton and then went on to work with the Bush administration.  Alamoudi created the Muslim Chaplain Program at the DoD, worked as a Good Will Ambassador for the State Department, was widely recognized as a “moderate Muslim,” had unfettered access to the highest levels of power in our government, publicly pronounced his support of terrorist organizations and was an Al Qaeda financier who plotted with two UK-based Al Qaeda operatives to kill Saudi Crown prince Abdullah, who went on to become King Abdullah.

[Note:  The U.S. government also considered Imam Anwar al-Awlaki a “moderate Muslim.”  Awlaki gave presentations at the Pentagon, the U.S. Capital, and worked with government officials.  That lasted right up until he was killed by a U.S. drone strike in 2011 for being the Al Qaeda leader in Yemen.]

Many of the Muslim chaplains assigned by Alamoudi are still working with our military.  The numerous Islamic organizations Alamoudi created and led, and the individuals who worked with him providing material support to Al Qaeda, Hamas, and the Muslim Brotherhood, can still be found walking the streets of Washington, D.C., the halls of Congress, working with the national security staffs, and elsewhere in America.

This dangerous pattern of our leaders and our media lifting up and proclaiming leaders in the Islamic community “prominent moderate Muslims” continues today.

Funny how they all turn out to be terrorists.

Leave a Reply to Alan Carpien