In the year leading up to the Garland, Texas shooting Understanding the Threat (UTT) briefed Arizona law enforcement officials about the threat posed by the jihadi Islamic Community Center of Phoenix – the place from which the two Islamic jihadis originated. 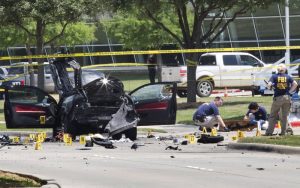 For the last several years, UTT has been briefing and speaking about the threat from Hamas’ Islamic Center of Irving (Texas) where the “Clock Boy” operation was hatched and executed targeting the Mayor of Irving.

One week prior to the attacks in Brussels in a UTT training program for law enforcement, UTT briefed that the most dangerous city in Europe was Brussels, and detailed why that was for all the students.

Yet, the U.S. government and the majority of the media continue to state they cannot identify any connection between the attacks of 9/11/01, the Fort Hood (TX) shootings, the Boston Marathon bombers, the San Bernadino shooters, and the dozens of other jihadi attacks in the United States in the last fifteen years.

Newsflash:  The commonality between all of these assailants is that they are all Sharia adherent Muslims – ie they are JIHADIS.

When Sharia is understood, the entire global Islamic threat comes into perfect clarity.

To read more about UTT’s predictions for 2016, click HERE.

For more information about the threat, please go to www.UnderstandingtheThreat.com.