Last week’s UTT article entitled “Unfit for Duty” makes the point that two of the men professionally responsible to the President of the United States for speaking truthfully about national security threats – LtGen HR McMaster and Sebastian Gorka – are not doing so, specifically as it relates to the Islamic threat.

In response to the article, UTT received numerous communications from individuals, groups, and the media.  Many of the comments came from people with a clear understanding of the threat to the United States from the Global Islamic Movement, and the article was referenced and republished in several places including here and here. 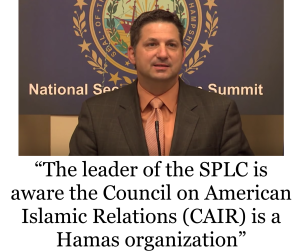 Some, however, are still having a hard time understanding the true nature of the threat from Islam.  Many are simply not capable of believing such a grave threat exists in such a real and immediate way.  Some people are still ignorant about what Islam actually teaches because they have been subject to years of Islamic leaders and elected officials in the West telling them Islam is not part of the problem, but is part of the solution.  See the UTT video on this HERE.

Many media outlets appear disinterested in the truth.  Despite the fact Islam – at the doctrinal level at Al-Azhar University in Egypt to Islamic elementary schools – teaches jihad is an obligation until the world is under Islamic rule, the media continues to gobble up whatever the Muslim Brotherhood/Hamas leaders tell them and dutifully regurgitate it.

So when organizations like UTT speak factually about Islam and what Muslims are taught at Islamic schools across the globe, the media stands with terrorists and anti-American terrorist supporters like the Souther Poverty Law Center (SPLC), and levels personal attacks without ever discussing the facts of the matter.  This is because they cannot win the argument on the facts.

SPLC’s President Richard Cohen must remember he sat next to UTT’s Vice President Chris Gaubatz in the summer of 2016 while Mr. Gaubatz – who went undercover at CAIR for six months and retrieved over 12,000 documents from their headquarters revealing Hamas (doing business as CAIR) is involved in fraud, sedition, terrorism, and other offenses – testified before Senator Cruz’s hearing.  Mr. Cohen cannot honestly say he is not aware CAIR is a Hamas/Muslim Brotherhood entity.  We do have photographic and video evidence Mr. Cohen was seated approximately 18 inches away from Mr. Gaubatz as he testified. 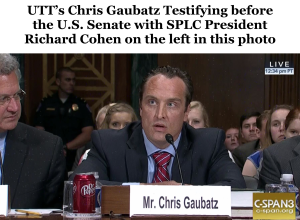 See the coverage of UTT’s rebuttal of SPLC’s attempt to slander UTT and its founder John Guandolo here and Chris Gaubatz’s testimony in front of a U.S. Senate hearing detailing the Muslim Brotherhood/Islamic threat while seated next to SPLC President Richard Cohen here.

A day is fast coming where attorneys and leaders at SPLC, as well as members of the media, will have to account for their direct and material support for terrorist groups, especially since it is a violation of federal law.

So what is it UTT teaches that causes such spasms among hard-left marxists and jihadists?

Its called “The Truth.”  Here is a small taste of it.

“An Introduction to Hadith and Fiqh” published in Uganda for children and adults new to Islam states: “Sharia basically means Islamic Law…Therefore the law is basically a users’ manual (for Muslims)…The Sharia is composite in that Islam is a complete way of life.  In an Islamic state ideology, law and religious faith are interrelated…Sharia is the ideal code of conduct.”

What Islam is All About is a widely used text book for junior high school students in Islamic schools in America.  It says “The law of the land is the sharia of Allah” and also says “The duty of the Muslim citizen is to be loyal to the Islamic state.”

Reliance of the Traveller, a 14th century book of Islamic Law certified as good law by Al Azhar and the Muslim Brotherhood (IIIT & Fiqh Council of North America) states:  “The good is not what reason considers good, nor the bad what reason considers bad.  The measure of good and bad according to this school of thought is the Sacred Law, not reason.”

Reliance of the Traveller is the book of sharia the Islamic Society of North America (ISNA) says should be in the home of every Muslim in America, and was widely available at the Muslim Brotherhood’s last few national MAS-ICNA conferences.  It defines jihad as:  “Jihad means to war against non-Muslims” and is “obligatory” until the world is under sharia.  Reliance also includes “There is no indemnity for killing an apostate since it is killing someone who deserves to die.”

The last fatwa issued by a sitting Caliph was clear about the duties of Muslims with regard to jihad and fighting non-Muslims:  “Those who, at a time when all Moslems are summoned to fight, avoid the struggle and refuse to join in the Holy War, are they exposed to the wrath of God, to great misfortunes, and to the deserved punishment?  Yes.”  (Caliph Mehmed V, November 15, 1914)

The Muslim community voted the Grand Sheikh of Al Azhar the number 1 most influential Muslim on the planet demonstrating how Muslims view the authority of Al Azhar.  The Chairman of Al Azhar, Dr. Abdul Fatah Idris states:  “This is jihad, when a Muslim fights an infidel without treaty to make the word of Allah Most High supreme, forcing him to fight or invading his land, this is a permissible matter according to the consensus of the jurists.  Indeed, it is an obligation for all Muslims.  Now, if the deeds of jihad — including fighting the infidels and breaking their spine through all possible means — are permissible according to the Sharia, then it is impossible to define those acts as terrorism.”

The most authoritative hadith scholar in Islam is Bukhari who quotes the Islamic prophet Mohammad as saying (2926, Book 56, Hadith 139):  “The hour of judgment will not come until the Muslims fight the Jews and kill them.”

This would naturally lead to Islamic schools in America teaching:  “Jihad in the path of God – which consists of battling against unbelief, oppression, injustice, and those who perpetrate it – is the summit of Islam. This religion arose through jihad and through jihad was its banner raised high. It is one of the noblest acts, which brings one closer to God, and one of the most magnificent acts of obedience to God.” (Hadith and Islamic Culture: Management, Social Studies, Natural History, and Technical Studies)

Why are Anwar al Awlaki’s CDs and books sold in mosque bookstores across America?  Why was Omar Abdel Rahman (the “Blind Sheikh”) a revered Islamic scholar around the world?  Why did a prominent scholar and teacher at Al Azhar, Abdullah Azzam, join Osama bin Laden to create Al Qaeda?  These men were teaching and acting on authentic and authoritative Islamic doctrine.

The Law of Apostasy states acts that entail leaving Islam include:  “to be sarcastic about any ruling of the Sacred Law” and carries the death penalty. [Reliance, o8.7 (19)]

It is a capital crime in Islam for a Muslim to teach another Muslim something about Islam that is not true, and it is obligatory for Muslims to lie to non-Muslims when the goal is obligatory (Reliance, r8.0) – like in jihad.

So, for national security strategists, intelligence professionals, media people, elected officials, university presidents, and others – if you want to learn about Islam, and your path to learning includes talking to the local Imam or your friend who is a Muslim, that is unprofessional.  Read books written for Muslim audiences by Islamic authorities and you will always get the “version” of Islam ISIS and Al Qaeda teach and propagate.

There is one Islam and one Sharia.

Come take a class with UTT and learn the truth.