Not understanding the Global Islamic Movement and what drives its actions is the reason America lost the wars in Iraq and Afghanistan.  Since 9/11, military generals, Presidents, National Security Advisors, Members of Congress, and others have been too busy to stop and actually do what the law and their Oath of Office require them to do – know all enemies or do due diligence to know all enemies.  You cannot “protect and defend against all enemies, foreign and domestic” if you do not do this.

Last weekend, May 21, 2017, the President of the United States participated in a “Summit” in the Kingdom of Saudi Arabia speaking to the leaders of every muslim nation on earth, except Iran, about how to deal with the growing threat of “terrorism.” 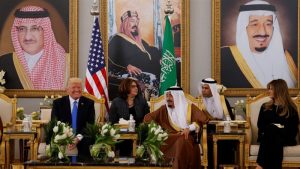 When this event is viewed from the perspective of the Islam, the United States submitted to the objectives of the Global Islamic Movement in this current phase of their efforts.

In order to understand the magnitude of this, the language used in this summit must be understood the way the muslim world understands it through the filter of sharia – which is the only source through which Islamic leaders understand anything.

We know this because Kings and Heads of State of all OIC nations were present at the summit when the King of Saudi Arabia spoke.  The OIC – Organisation (sic) of Islamic Cooperation – is the largest international organization in the world second only to the UN, consists of all muslim nations on earth, and is the largest voting block in the UN. The OIC holds Extraordinary Summits every three (3) years at which the Heads of State and Kings of every muslim nation meet and decide strategic directions for the muslim world. In 1990, the OIC Extraordinary Summit approved the “Cairo Declaration on Human Rights in Islam.”  It states, in part, life cannot be taken “except for a Shari’ah prescribed reason,” and goes on to say in Article 19, “There shall be no crime or punishment except as provided for a in the Shari’ah.”

Finally, the last two articles of the Cairo Declaration, Articles 24 and 25 state:

“All the rights and freedoms stipulated in this Declaration are subject to the Islamic Shari’ah.” (Article 24)

“The Islamic Shari’ah is the only source of reference for the explanation or clarification of any of the articles of this Declaration.” (Article 25)

The Cairo Declaration was officially served to the UN by the OIC in 1993. This means the entire world was put on notice in 1993 that when leaders of the muslim world use the phrase “Human Rights” they mean “the imposition of sharia law,” and sharia is the only filter through which they understand the language they use when discussing any issues.

In his speech, which preceded President Trump’s comments, Saudi King Salman made many references to “terrorism” and “extremism” and the need to eradicate it from the planet.  Specifically, he said the world must  “stand united to fight the forces of evil and extremism whatever their sources are in response to the dictates of our Islamic religion…Terrorism is a result of extremism.”

When muslim leaders use words, those words must be understood as they are defined in Islam, not as they are understood in the West.  “Terrorism” is defined in Islam as “killing a muslim without right.” Under sharia muslims may be killed if they apostasize from Islam, kill another muslim without right, or if they violate any other law under sharia for which there is a capital crime. Otherwise, to kill a muslim is to be a “terrorist.”  “Extremism” in Islam is to exceed ones ability – to move the Islamic Movement ahead too quickly, thus putting the muslim ummah (global muslim community) in danger because this risks losing muslims who do not understand their duties under sharia and exposing Islam’s true intentions to the non-muslim community thus bringing violence upon muslims – terrorism.

Saudi King Salman spoke at the summit yet he sent two messages:  one for the muslims and one for the non-muslims.  Americans and the rest of the non-muslim world heard the King say he is going to eradicate “terrorists” from the planet and thought he was talking about ISIS and Al Qaeda.  The muslim world heard that the United States was providing hundreds of millions of dollars and weapons to support the Islamic world’s effort to destroy anything on the planet that stands in the way of the complete implementation of sharia – a command from Allah in the command and reflected in the words and actions of Islam’s prophet Mohammad.

Therefore, since President Trump has already killed muslims without right under sharia by ordering the U.S. military to launch strikes against Syria and elsewhere, Islam views him as a “terrorist,” and the Saudi King is speaking about the U.S. President and the United States when he says “Terrorism” must be eradicated.  The Saudi King was not referring to muslims who bomb an arena in Manchester, England or kill Americans in an Orlando, Florida bar or muslims who fight on battlefields in Iraq or Afghanistan when he uses the word “terrorist.”

Understanding this necessarily completely changes America’s perspective of what took place in Saudi Arabia last weekend.  The President of the United States is being given counsel and advice from U.S. officials who appear to lack any understanding of any of this, which will lead America’s to defeat.

For UTT’s complete analysis of the speeches by King Salman and President Trump please click HERE.