Understanding the Threat (UTT) stormed Nebraska and Iowa last week speaking to several audiences and educating them about the threat of the Islamic Movement in the United States.

The multi-day trip, hosted by the Global Faith Institute of Omaha, culminated in an event in front of 150 citizens in the rural town of Oakland, Iowa (Pottawattamie County) where a dozen or so Marxists and jihadis (“terrorists”) sat in the front row during the event holding up newspapers in protest, while outside the venue protesters mingled with some holding signs professionally printed by “socialistworkers.org.” 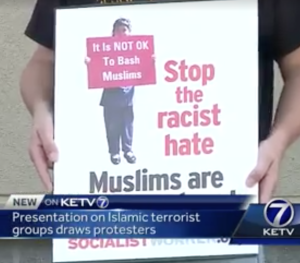 A protester at the UTT presentation holds a sign printed by SocialistWorkers.org

Hamas (CAIR) supporters, including candidate for the Board of Supervisors democrat Glenn Hurst, came to disrupt the program, but the facts and evidence got through to the vast majority of the audience who absorbed the information and understood the threat.  At least one jihadi sat in the front row among the protesters. 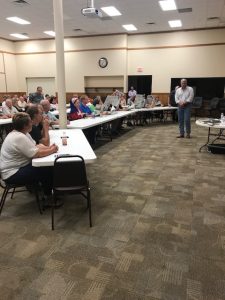 The overwhelming majority of the crowd came to listen and learn more about real threats to the community, but Marxists and jihadists are not about free speech, they are about controlling the message.

Local officials working with Hamas and Marxists/subversive groups like SPLC is exactly what UTT means when it discusses the “Red-Green Axis.” 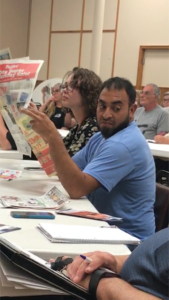 Understanding the Threat was filming the event for a professional upcoming DVD, so the exchanges between Hamas (dba CAIR) and UTT is well-documented.  For a snippet of the event, watch a 2 minute video HERE.

The Chairman of the Pottawattamie County GOP, Jeff Jorgensen, strongly supported the Understanding the Threat (UTT) presentation and demonstrated great courage.  The rest of the county GOP, however, as well as the Iowa State GOP shied away from the event and went to great lengths to make sure they were not in support of what Mr. Jorgensen was doing.

Through all of this, as usual, none of the detractors – including the local media – mentioned the Council on American Islamic Relations (CAIR) was identified by the U.S. government as being created by the U.S. Muslim Brotherhood’s Palestine Committee, which is Hamas in the United States.  Nor was it mentioned by the media or others – besides UTT – that UTT’s Vice President Chris Gaubatz spent several months undercover at CAIR’s office in MD/VA and its headquarters in Washington, D.C. pulling over 12,000 documents out of their offices revealing CAIR is involved in criminal activity including fraud, sedition, and terrorism, among others.

Those in attendance did come to learn that many of the Islamic centers/mosques and organizations around Nebraska and Iowa – the Islamic Center of Omaha and the Islamic Foundation of Lincoln for instance – are owned/controlled by the Muslim Brotherhood.

Why, you might ask, would the Islamic and Marxist Movements care UTT is speaking to crowds in rural Iowa?  Because the enemy is currently working in Iowa to influence Presidential elections and is not pleased UTT is spreading truth!

The Global Faith Institute was founded by Dr. Mark Christian, a former muslim Imam who became a Christian and speaks frankly about the dangers of Islam.  Dr. Christian made it clear the information UTT teaches about Islam is right on the mark.  Pun intended.

Another victory in this long battle.  Many more to come.