This summer has been a summer of jihad in Europe.  As European leaders surrender to Islam, Islam is attacking Europe.  When all of the attacks are seen in list form, it is hard to deny the West is at war. 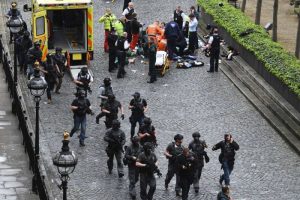 Here is a list of 2017 jihadi attacks in Europe from June 1 to today (hat tip to Religion of Peace):

June 1, GERMANY: A father of two is stabbed to death by 2 Muslims for smoking during Ramadan and refusing to fast.

June 3, ENGLAND: 3 muslim migrants shout “this is for Allah” & plow into pedestrians on London Bridge, then proceed to a market, where they stab anyone within reach. Eight are killed.

June 6, FRANCE: A muslim attacks a police officer with a hammer outside the Notre Dame cathedral.

June 18, FRANCE: A Jihadi stabs a French farmer while yelling praises to Allah.

June 19, FRANCE: A muslim man detonates a bomb inside his vehicle and smashes into a police van near the Champs-Elysees. Only the jihadi is killed. No other injuries.

June 20, BELGIUM: A muslim shouting “allah u akbar” detonates a bomb in the Central Train Station in Brussels. Jihadi is killed. No other injuries.

June 30, AUSTRIA: A muslim slits the throats of an elderly couple in their home.

July 17, ITALY: A muslim migrant stabs a police officer while yelling about being a martyr for Allah.

July 21, ENGLAND: A guard and prisoner have their throats slashed by a Muslim yelling ‘This is for Allah’

July 28, GERMANY: A muslim yelling praises to Allah rushes into a supermarket and stabs five people, one of whom dies.

August 9, FRANCE: A muslim living illegally in France deliberately plows his car into a group of soldiers.

August 16, SPAIN: A woman is killed in a house blown up when an Islamic Imam accidentally detonates a bomb.

August 17, SPAIN: A muslim driver mows down over a hundred pedestrians along a venue, killing fourteen, including a 3-year-old and his mother.

August 19, RUSSIA: A muslim stabs eight people outside a row of shops.

August 25, ENGLAND:  A muslim drives his vehicle into a group of people and then slashes police with a sword while yelling “Allah u akbar.”

August 25, BELGIUM:  A Somali muslim attacks police with a machete while yelling “Allah u akbar.”

All of these attacks are LAWFUL under Islamic Sharia.