In the summer of 2014, UTT scheduled a one-day training program for law enforcement in the Phoenix, Arizona area hosted by the Maricopa County Attorney’s Office (MCAO).  The program was designed to teach police officers and investigators about the Islamic Movement in the United States and Arizona, and provide them with tools to help them identify and investigate the threat.

The attacks against UTT and the MCAO were immediate.

On August 14th the Muslim Advocates along with 75 other organizations sent a letter to President Obama’s Counterterrorism Advisor Lisa Monaco which called UTT’s training “bigoted” and asked the administration to re-train all law enforcement officers who have been through such training.

The letter, signed by the ACLU’s legal director in Arizona, was also signed by the current and previous leaders of Hamas (dba CAIR) in Arizona (Imraan Siddiqi and Mohamed El-Sharkawy), the leader of the Muslim Brotherhood’s Muslim American Society (AZ), and the leaders of the MB’s Islamic Community Center of Tempe (ICCT) and Islamic Community Center of Phoenix (ICCP).  The properties of the ICCT (1131 East 6th Street, Tempe) and ICCP (7516 North Black Canyon Hwy, Phoenix) are owned by the North American Islamic Trust (NAIT) which is the bank for the Muslim Brotherhood in North America.  In the largest terrorism financing and Hamas trial ever successfully prosecuted in U.S. history (US v Holy Land Foundation, Dallas 2008), NAIT was identified by the Department of Justice as a member of the U.S. Muslim Brotherhood which directly funds Hamas, a designated Foreign Terrorist Organization.

In fact, the two jihadis who attacked the Draw Mohammad competition in Garland, Texas came from the ICCP.  Fortunately, they were killed before they could harm anyone. 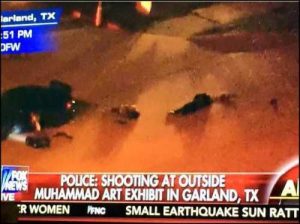 On September 19, 2014, 300 police officers from all over Arizona sat through approximately 8 hours of training from UTT which detailed the jihadi threat with facts and evidence.  At the end of the program, when asked, all of the officers admitted they did not previously know the information presented, and all agreed the information is critical to protecting their community.

A victory for the good guys.

So why did the ACLU, the Arizona media, and religious leaders join with the terrorist group Hamas (doing business as CAIR) to condemn fact/evidence-based training which law enforcement calls “critical” to doing their jobs and has led to investigations into terrorism matters being opened in Arizona?  That is a fair question.

This week, UTT finds itself in Louisiana training over 150 law enforcement officers from all over the state. Six days ago, attacks and threats targeting UTT and the host – the Rapides Parish District Attorney – came from the Southern Poverty Law Center (SPLC), Hamas (dba CAIR), the Associated Press and local media, and local Islamic organizations, including the Islamic Society of Central Louisiana.

Yet, over 150 law enforcement officers now know, from reviewing facts and evidence, the Muslim Brotherhood has a massive jihadi network here in America.

Police also now know CAIR was created by the U.S. Muslim Brotherhood’s Palestine Committee, which is Hamas in the U.S., and got to hear from UTT’s Vice President Chris Gaubatz as he shared about his experience undercover inside Hamas’ (CAIR) headquarters in Washington, D.C.  Chris shared about retrieving over 12,000 documents from CAIR’s headquarters which revealed CAIR is involve in fraud, sedition, and terrorism.  The police now know CAIR is Hamas.

Chris also shared other experiences he had visiting mosques across America and what is being taught there.

Another victory for the truth and for freedom.

Now these officers will be able to take what they have learned back to the streets to identify real threats so they can use the full force of the law to protect their communities.

What are the common denominators for the successes then and now?

First is the power of UTT’s message, built on facts and evidence – real truth about real threats.

Secondly, the courage and tenacity of leaders like Maricopa County Attorney Bill Montgomery and Rapides Parish District Attorney Phillip Terrell are an important key to these successes.

These warriors are ensuring their citizens are well-served by the men and women in blue.  Citizens of Maricopa County (AZ) and Rapides Parish (LA) should thank and support these men of courage.