On September 11, 2001, and in the weeks following that tragic day, President George W. Bush demonstrated compassion, empathy and love for his fellow Americans, while also showing the world strength and resolve.

On September 20, 2001, President Bush addressed the nation and told us “The terrorists practice a fringe form of Islamic extremism that has been rejected by Muslim scholars and the vast majority of Muslim clerics; a fringe movement that perverts the peaceful teachings of Islam.”

Actually ISIS and Al Qaeda have never misquoted sharia (Islamic law) in furtherance of their actions, and there is only one “version” of Islam – the one that commands jihad until the world is under Islamic rule.

As the weeks after 9/11 rolled on, the Bush administration, like the Clinton administration before it, relied more and more on Muslim advisors inside the U.S. government to tell it about the “terrorist” threat and how to deal with it.  Karl Rove and Grover Norquist brought jihadis (“terrorists”) like Abdurahman Alamoudi (Al Qaeda), Sami al Arian (Hamas/MB), Suhail Khan (Muslim Brotherhood) and others into the Bush camp.  The Bush team believed working with “moderate Muslims” was the path to success.

They were catastrophically wrong.

As a matter of fact on 9/11/2001, suit-wearing jihadis from prominent U.S. Muslim Brotherhood/Hamas organizations were scheduled to meet with President Bush at the White House to get him to fulfill his promise to shut down legal proceedings using classified evidence unavailable to defendants (read: “terrorists”) – a proposal driven by Hamas/Palestinian Islamic Jihad leader Sami al Arian. 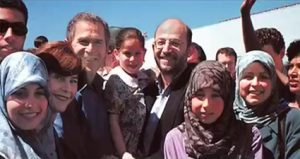 Following this course led to the U.S. losing wars in Afghanistan and Iraq despite the fact our military crushed our enemies on those battlefields.  It also led to disastrous domestic counter-terrorism strategies. This course failed because we relied on sharia adherent jihadis wearing suits to provide insight to U.S. National Security professionals and elected officials how to fight the war.

This course continued and accelerated under the Obama administration, and today there is no training program inside the U.S. government teaching federal agents in the FBI, DHS, the military or anywhere else about the enemy’s threat doctrine – sharia – nor about the Muslim Brotherhood’s jihadi network here and how it operates inside our system.

We are strategically blind to this threat.

While President Trump is taking great strides to turn around years of poor foreign and domestic policy related to the jihadi threats to the United States, the greatest hurdles to be overcome include:

(1) Establishment Republicans who still view Islam as a “religion of peace” and defend Islamic leaders in the U.S. despite the evidence on the table most of them are jihadis, and (2) an absence of deep knowledge of the enemy’s doctrine (sharia) and how they operationalize it.

This week President Bush’s daughter Jenna proudly republished her father’s 9/17/2001 speech from inside the Islamic Center of Washington, D.C. in which he proclaimed “Islam is peace.”  Really? 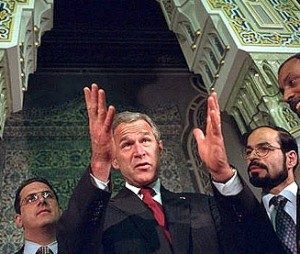 Karen Hughes, one of President Bush’s closest advisors who is the former Under Secretary of State for Public Diplomacy and Public Affairs, sits on the board of the pro-jihadi organization Institute for Global Engagement (IGE).

Karl Rove, the architect for much of President Bush’s plans after 9/11, has never admitted any of his policy recommendations were failures with regards to the Islamic threat nor has he changed his positions despite the fact we lost the wars in Afghanistan and Iraq.  Yet today, Rove retains significant status in the Republican party.

Arguably two of the most venerated U.S. Senators – John McCain and Lindsey Graham – have already demonstrated on numerous occasions they have no understanding about the Islamic threat America faces, cannot determine friend from foe, and publicly chastised President Trump for freezing immigration from nations hostile to the United States.

This is all pertinent because some of the key positions inside the new administration are being filled by former Bush administration personnel, including the new Assistant to the President for Homeland Security and Counterterrorism Tom Bossert.

U.S. strategies aimed at “Global War on Terrorism” failed under the Bush administration when the U.S. government wrote constitutions in Iraq and Afghanistan in 2005 creating Islamic Republics under sharia, thus achieving Al Qaeda’s regional objectives for them.

This is the price of having no deep understanding of the enemy, their strategies, nor their modus operandi.

As President Trump continues to push his agenda forward to secure the United States, the primary point of friction will come – at a critical time – from establishment Republicans.  The same people who helped propel our enemies into the halls of power under the Bush administration and who were mostly silent under the Obama administration – save a few heroes like Bachmann, Myrick, Cravaack, Gohmert, and others – will continue along the road of blissful ignorance or direct hostility towards any aggressive actions to actually defeat the Islamic Movement.

Why is this important to average Americans?  Because it’s your safety.  It’s your future.

As UTT continues to state, this war will be won or lost at the local level.  Even if President Trump does everything he promised and acts flawlessly as our Commander in Chief, local and state police must carry the burden to identify and uproot the enemy from their communities.

Currently, they are not prepared to do it because they have not been trained to do it – save for those trained by UTT.  By and large, they cannot identify the threat and, therefore, cannot deal effectively with it.

This is UTT’s mission, and we are working with state and local officials to prepare them for the coming battle.  It is what we do.

This mission will have a much greater chance of success if those at the federal level also had a deep knowledge of this threat, and support these endeavors at the state and local level.