Share
This week the Federalist published a scathing article about General Petraeus raising questions about his criminal actions by mishandling classified information, the possibility he is an agent of foreign powers – namely the Islamic governments of Saudi Arabia and UAE, as well as Kazakhstan – and that he favors silencing Americans’ right to free speech over offending Muslims. 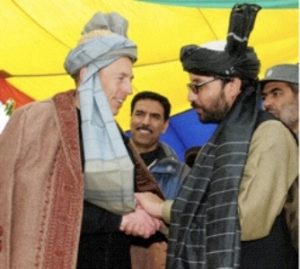 The latter is where UTT will focus today’s Throwback Thursday article.

In an Op-Ed on May 13, 2016, General Petraeus spent a lot of time defending Muslims and their feelings, yet did not seem concerned about the liberties of Americans – specifically our right to free speech and expression without being beheaded, crucified or shot dead, as Muslims are prone to do.

Specifically, the General wrote:  “Those who flirt with hate speech against Muslims should realize they are playing directly into the hands of al-Qaeda and the Islamic State.”

Actually, if at some point since 9/11 General Petraeus had taken a few hours to study the enemy’s basis for all of their actions – sharia – and understood the driving force in the Global Movement – the International Muslim Brotherhood – has a strategy focused on getting our leaders to do the Muslim Brotherhood’s bidding for them, he might actually see that HE is one of those stooges doing the enemy’s bidding for them.

When the United States government wrote the Constitutions for Iraq and Afghanistan which created Islamic Republic’s under sharia thus giving Al Qaeda the objectives for which they were fighting, that was Civilization Jihad by OUR hands.  We did the enemy’s bidding for them.

When General Petraeus scolded a Pastor in America for burning a Koran (Sep 2010), that is Civilization Jihad by OUR hands – specifically, the General was enforcing the Islamic law of Slander by ensuring an American citizen would not take an action that would offend Muslims.

General Petraeus wrote in his May 2016 Op Ed:  “I fear that those who demonize and denigrate Islam make it more likely that it will be our own men and women who ultimately have to shoulder more of this fight.”

Actually sir, the commanding general not knowing his enemy is far more dangerous to the troops than those who speak truth about – and thereby offend – Muslims.

Know the threat. Understand the Threat.