President Jimmy Carter’s Ambassador to the United Nations, Andrew Young, said “(Ayatollah) Khomeini will eventually be hailed as a saint.” 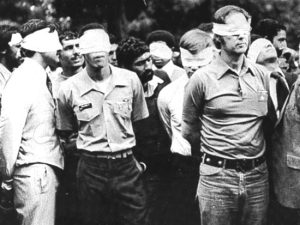 As a result of the U.S. administration being soft-hearted, soft-minded, and naive, Iran launched an Islamic revolution, and on November 4, 1979 52 American hostages were taken from the U.S. Embassy in Tehran and held for 444 days until President Reagan’s Inauguration Day.

President Obama’s administration appeased Iran and provided it billions of dollars in violation of federal law.

This was done despite the recognition by the U.S. government that Iran is the most dangerous state sponsor of terrorism in the world, continues to aggressively pursue nuclear weapons, and makes it’s desire to destroy the United States and Israel clear.

Iran’s constitution states:  “In the organization and equipping of the countries (sic) defense forces, there must be regard for faith and religion as their basis and rules. And so the Islamic Republic’s army, and the corps of Revolutionary Guards must be organized in accordance with this aim. They have responsibility not only for the safeguarding of the frontiers, but also for a religious mission, which is Holy War (JIHAD) along the way of God, and the struggle to extend the supremacy of God’s Law in the world.”

The Iranian constitution then quotes Koran 8:60 which is:  “Against them make ready your strength to the utmost of your power, including steeds of war, to strike terror into the hearts of the enemies of God and your enemies, and others beside.”

This is the same Koranic quote referenced on the International Muslim Brotherhood’s logo.

Hassan Nasrallah, the leader of Hezbollah – a designated terrorist organization – reports to the Supreme Leader of Iran, Ayatollah Ali Khamenei. 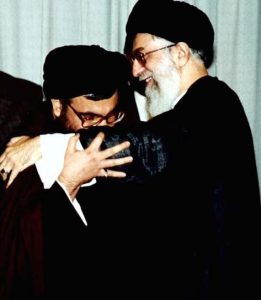 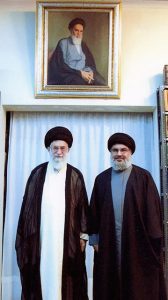 From the Congressional Record dated October 4, 2002:  “Prior to September 11, Hezbollah, through its terrorist wing, the Islamic Jihad Organization, had killed more Americans, by far, than any other terrorist organization in the world. The bombing of U.S. Marine Corps barracks in Beirut, the bombing of the U.S. Embassy in Beirut, the hijacking of TWA flight 847, numerous other brutal kidnappings and murders of Americans.”

From the 9/11 Commission Report:  “In June 1996, a truck bomb demolished the Khobar Towers apartment complex in Dhahran, Saudi Arabia, killing 19 U.S. servicemen and wounding hundreds.  The attack was carried out primarily by Saudi Hezbollah, an organization that had received help from the government of Iran…In late 1991 or 1992, discussions in Sudan between Al Qaeda and Iranian operatives led to an informal agreement to cooperate in providing support – even if only training – for action carried out primarily against Israel and the United States.  Not long afterward, senior Al Qaeda operatives and trainers traveled to Iran to receive training in explosives…The relationship between Al Qaeda and Iran demonstrated that Sunni-Shia divisions did not necessarily pose an insurmountable barrier…Senior managers in Al Qaeda maintained contacts with Iran and the Iranian-supported worldwide terrorist organization Hezbollah…Al Qaeda members received advice and training from Hezbollah.  Intelligence indicates the persistence of contacts between Iranian security officials and senior Al Qaeda figures after Bin Laden returned to Afghanistan…In October 2000, two future muscle hijackers Mohand al Shehri and Hamza al Ghamdi, flew from Iran to Kuwait…In November (3 other muscle hijackers) traveled in a group from Saudi Arabia to Beirut and then onward to Iran.  An associate of a senior Hezbollah operative was on the same flight that took the future hijackers to Iran…There is strong evidence that Iran facilitated the transit of Al Qaeda members into and out of Afghanistan before 9/11, and that some of these were future 9/11 hijackers.” 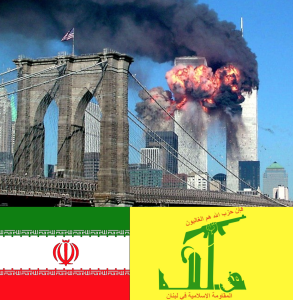 FBI officials testified in February 2002 “FBI investigations to date continue to indicate that many Hezbollah subjects based in the United States have the capability to attempt terrorist attacks here should this be a desired objective of the group.”

CIA Director George Tenet testified in February 2003 “Hezbollah, as an organization with capability and worldwide presence, is [Al Qaeda’s] equal, if not a far more capable organization.”

A July 28, 2011 U.S. State Department press release reads:  “The U.S. Department of the Treasury today announced the designation of six members of an al-Qa’ida network headed by Ezedin Abdel Aziz Khalil, a prominent Iran-based al-Qa’ida facilitator, operating under an agreement between al-Qa’ida and the Iranian government.”

In 2012, the U.S. Treasury Department designated the Iranian Ministry of Intelligence and Security – Iran’s primary intelligence agency – for providing material support to Hezbollah and Hamas (TERRORIST organizations), for providing Al Qaeda operatives with documents (passports, ID), facilitating Al Qaeda’s movement in Iran, and providing weapons and money to Al Qaeda in Iraq during the war there.

Approximately one week ago, U.S. Central Command Commander General Votel testified before Congress that “Iran posses the greatest long-term threat to stability in this part of the world.”