This kind of crazy stuff only happens at the highest levels of the United States government.  In different decades people would call it “Treason,” but in today’s world…nothing.

Here is today’s UTT Throwback Thursday.  A look back at some news that matters in this war.

John McCain Loves Him Some ISIS 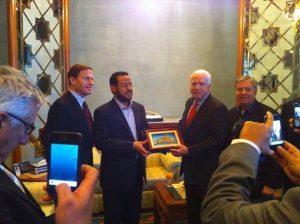 US Senators Richard Blumenthal (CT), John McCain (AZ), and Lindsey Graham (SC) give AQ/ISIS Leader Abdelhakim Belhadj an award for being a wonderful human being

To say Senator John McCain cannot tell the good guys from the bad guys would be the understatement of the century.  Abdelhakim Belhaj was the leader of Al Qaeda in Libya (Libyan Islamic Fighting Group), and the target of a rendition operation by the U.S. government.  Belhaj was returned to Libya and spent seven years in prison because he is a senior jihadi leader and everyone knew it. Before that and now, as the reasoning must go, he was/is a “moderate Muslim.”

To be “bipartisian,” Mrs. Clinton also had her own part in this.  As Secretary of State her office coordinated the shipment of weapons/arms from Libya to Syria that went to ISIS fighters.  Ambassador Stephens, who was killed in Benghazi, met directly with Belhaj.

Adbelhakim Belhaj is “moderate” – just like Abdurahman Alamoudi, Anwar al Awlaki, and all the rest who turn out to be Al Qaeda or ISIS after they have worked with the U.S. Congress, White House, and everyone else in our government. 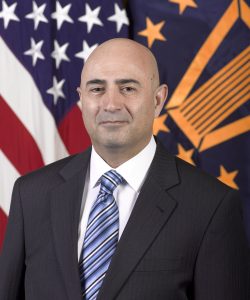 Where do you even go with this?

Dr. Vahid Majidi is an Iranian-born Muslim.  He was the FBI’s Assistant Director for their WMD Program from 2006-2012?  And Iranians are very proud of him.

Don’t worry though, Dr. Majidi is no longer with the FBI.  He is now the Deputy Assistant Secretary of Defense for Nuclear Matters.

Somewhere in Tehran, Islamabad, Riyadh, and elsewhere in the Islamic world, Muslim leaders must be laughing uncontrollably at how easy this war is for them.