It has been over two and a half weeks since the “deadliest mass shooting in U.S. history” and it is strangely quiet in Las Vegas. 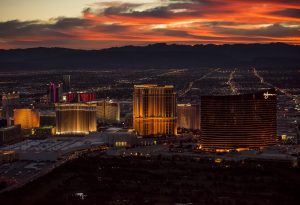 UTT’s John Guandolo and Chris Gaubatz were in Las Vegas for two days this week speaking at a terrorism conference.  They met with local leaders, spoke to law enforcement with insight into the investigation, and walked through the Mandalay Bay, the location from which the attack took place.

Several red flags continue to call attention to an investigation that is intent on looking everywhere but at the heart of the matter for answers.

The media has all but forgotten the event even took place.

And still, not a peep from any Islamic leader.

The best analysis of the attack based on facts and evidence currently available is that this attack was an Islamic State operation.  There is little or no information which even begins to contravene this assessment.

There is also the curious behavior of Australian Brian Hodge, who claimed on twitter he was in the room “next to Paddock” in 32134 at the Mandalay Bay.  Yet, evidence reveals Paddock was firing from rooms 32135 AND 32134.  Hodge also told Australian media outlets he was on the 32nd floor of the Mandalay Bay when the attack was in progress, and then fled to bushes near the hotel where he remained for 3 1/2 hours.

The story he told the media is strange and inconsistent with the facts.  See/hear his interviews here and here.

Yet, as of the publication of this article, Brian Hodge has not been interviewed by the FBI or the Las Vegas Sheriff’s Office.

While there are many wild theories floating on the internet about this attack, it is not hard to imagine why citizens would conjure up such theories.  The lead investigative agency, the FBI, declared the event “not terrorism” immediately after the event, and have demonstrated no understanding of recent attacks – certainly not in the last eight years.

Prior to Omar Mateen killing 49 and wounding nearly 60 others in Orlando, Florida, he was interviewed several times by the FBI as the subject of an investigation.  The week prior to his attack, Mateen cleared all of his debt in accordance with Islamic Law (sharia).  A shahid is forgiven all wrong-doing, except debt.

How many Counter-Terrorism agents in the FBI know this?  The answer is a number approximating zero.

Investigators have dismissed Islam or the Islamic State as a possible avenue to pursue in the Las Vegas attack, despite the fact that the Islamic State claimed the attack as their operation through their official channels.

By failing to include Islam and jihad as the root of the attack, investigators cannot look at the likely cause and the doctrine driving the jihadi Movement – sharia.  Paddock sent $100k to the Philippines.  Did it go to pay off debt?  You can be assured no one is looking at this one simple action in the proper investigative light.

Its not possible to get the answers you need when you shut the door on the most likely motive for this attack.