UTT Throwback Thursday: Linda Sarsour Has Always Been a Jihadi

UTT Throwback Thursday: Linda Sarsour Has Always Been a Jihadi

Linda Sarsour has been a jihadi for a long time, so her recent comments calling for warfare/jihad against the President of the United States should not shock people.  What is shocking, however, is that so many do not understand how dangerous she is and that she is a well-used tool in the enemy’s strategic information operations. 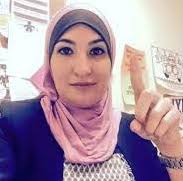 Remember, this war is – first and foremost – a war in the information battlespace.  Sarsour is a significant mouthpiece for the enemy.

In the run-up to the 2004 U.S. Presidential elections, an article was published by the Columbia Graduate School of Journalism’s online magazine which gave a few details about Linda Sarsour’s direct family connections to Hamas.

“Sarsour, a 24-year-old Palestinian-American, sighed. One of the men, she said, was a cousin who has been in Israeli jails for 25 years. The other man, she said, was a family friend serving a 99-year prison sentence in Israel.  Her brother-in-law, she said, is also serving a 12-year sentence, accused of being an activist in the Hamas, the religious militant group, though, she said, he was secular in his beliefs.”

When Sarsour speaks, her comments – like all comments from all Islamic leaders – must be understood through the filter of sharia because she is a sharia-adherent muslim (a jihadi). 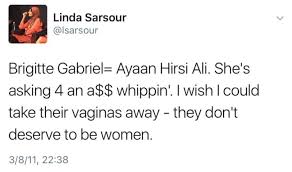 In Islamic law (sharia), “jihad” only means “warfare against non-muslims” to “establish Islam.”  There is no other legal definition in Islam for jihad as UTT details HERE and HERE.

Keep in mind Sarsour made these recent remarks at the ISNA convention.  ISNA was identified by the U.S. Department of Justice as a Muslim Brotherhood organization which funds the terrorist group Hamas.

In this same speech, Linda Sarsour heaped praise on Imam Siraj Wahhaj calling him “my favorite person in this room,” and saying he is “a mentor, a motivator, an encourager of mine. Someone who has taught me to speak truth to power and not worry about the consequences.”

Siraj Wahhaj is an unindicted co-conspirator in the 1993 World Trade Center bombing who openly calls for sharia to be implemented in the United States.

Linda Sarsour is being held up by the political left in the United States as a partner, leader and friend, while those on the political right are silent because they do not understand the threat.

Meanwhile, Sarsour is being unanimously defended by her fellow Islamic leaders who are part of an easily identifiable hostile/subversive Movement to overthrow the government of the United States in violation of federal law, among other things.

There is enough evidence in the hands of federal investigators and prosecutors to indict Linda Sarsour and many of the major Islamic organizations in the United States including ISNA, NAIT, CAIR, Muslim Students Association (MSA), Islamic Circle of North America (ICNA), Muslim American Society (MAS), Muslim Public Affairs Council (MPAC), International Institute of Islamic Thought (IIIT), and so many others.  Yet, these organizations have still not been shut down and their leaders have still not been put in prison. 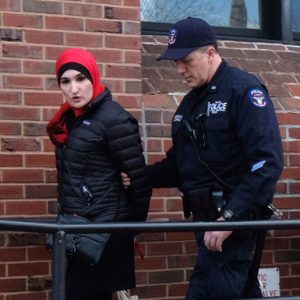 Linda Sarsour getting arrested in New York.  A sign of things to come?

This is why UTT continues to work diligently with state and local officials to use state statues to investigatively target and dismantle this dangerous network at the state and local level.  The federal government continues to demonstrate it does not understand the immediate threat America faces and, even if they did, the federal response is slow and ineffective.

This war will be won – or lost – at the local level.

Linda Sarsour is one more in a long line of muslim figureheads/leaders – like Abdurahman Alamoudi, Anwar al Awlaki, Sami al Arian, and so many others – who has been given political cover by both political parties, yet turns out to be a jihadi.

The federal system is catastrophically broken.  State and local officials must step up, get into this fight, and relentlessly pursue the Islamic enemy. They will only do this if citizens kick them in the backsides and make them.

So, America – what will you do?