UTT Throwback Thursday: On 9/11 The Enemy Steps In to Tell Us How to Fight the Enemy

Thanks to Karl Rove and Grover Norquist, American President George W. Bush was able to turn to his left and right after the jihadi attacks on the United States on September 11, 2001 and find any of a number of Muslim Brotherhood/Hamas and/or Al Qaeda leaders (suit-wearing jihadis) to tell him how to fight the war. 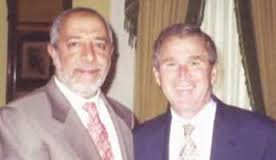 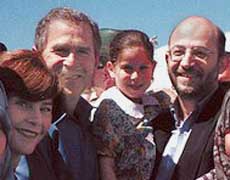 Republican strategist Grover Norquist and Muslim Brother Suhail Khan (who was working in the White House on 9/11).  Khan is the son of Mahboob Khan, one of the most prolific Muslim Brotherhood leaders in North America in the 1960’s to 1980’s.  Suhail also served as an assistant to two consecutive Secretaries of the Transportation with a Secret Clearance and continues to pass himself off as a “conservative Republican.” 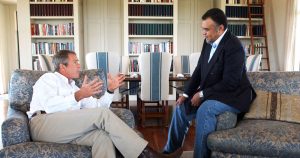 President Bush and Saudi Ambassador to the U.S. Prince Bandar, who directly funded Saudi Intelligence Officer Osama Bassnan who was in direct contact with 9/11 hijackers 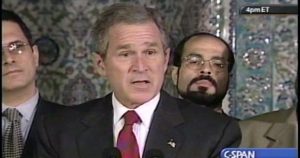 President Bush’s visit to the Islamic Center of Washington (DC) after 9/11.  On the right is Hamas Leader Nihad Awad (CAIR), and on the left is Khalid Saffuri (deputy to Al Qaeda operative Alamoudi) 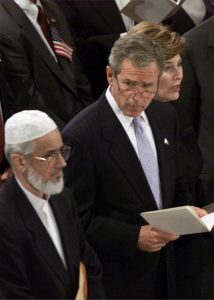 Imam Muzammil Siddiqi, a senior MB leader in the U.S. – who is currently the Chairman of the Muslim Brotherhood’s Fiqh Council of North America – at the memorial for 9/11 victims at the National Cathedral on 9/14/01

It is important to remember this entire war is much more a counterintelligence and espionage issue than it is a “counterterrorism” issue.

If you want to know how and why America lost the wars in Afghanistan and Iraq – despite President Bush’s strong stand after 9/11 and our military’s heroic efforts and great battlefield victories – it is because every time the President of the United States, the Secretary of State, military Generals and Admirals, leaders in our national security apparatus, and others turned for advice on how to proceed in the war or in any of our counterterrorism matters domestically, they were talking to the enemy.

And we still are.