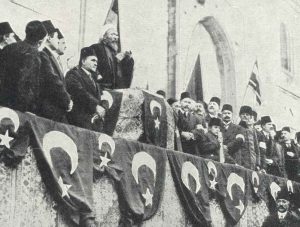 The Ottoman Empire – the last Islamic Caliphate prior to the current one claimed by ISIS leader Abu Bakr al Baghdadi – was established at the end of the thirteenth century, and was not dissolved until the early 1920’s.

The last sitting Caliph to issue a fatwa – Islamic legal ruling – was Mehmed V who ruled from April 1909 to July 1918.  Regarding the obligation of muslims to fight against Western nations in World War I, the fatwa – “Proclamation of a Holy War” dated November 15, 1914 – read, in part:

Question:  “Those who, at a time when all Moslems are summoned to fight, avoid the struggle and refuse to join in the Holy War, are they exposed to the wrath of God, to great misfortunes, and to the deserved punishment?”
Answer:  “Yes.”

In Islam, it is obligatory for muslims to obey sharia (Islamic Law).  The only legal definition of “jihad” in sharia is “warfare to establish the religion” and, therefore, cannot be evaded when the requirements of the law call for it.

Mehmed V was simply stating what all muslims should have known, and the fatwa also makes clear muslims who die in battle are sure to be martyrs and go to paradise.

Nothing new today – just a lot more muslims abiding by the sharia.

Leave a Reply to JLW