UTT Throwback Thursday: Will the Present Remain the Past?

UTT Throwback Thursday: Will the Present Remain the Past?

Stephen Coughlin arguably understands the enemy threat doctrine and how our enemy operates strategically better than anyone else in America. 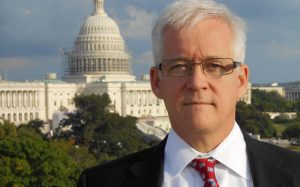 In 2008, Coughlin – an attorney with an expertise in international law and a Major in the U.S. Army (reserves) specializing in intelligence and strategic communications – was called to the Pentagon after 9/11 and worked as a contractor for the Directorate for Intelligence at the Pentagon under the Chairman of the Joint Chiefs General Peter Pace (USMC) as the Islamic Law expert for the Department of Defense.

A muslim named Hesham Islam, a senior advisor to then Deputy Secretary of Defense Gordon England, worked behind the scenes to ensure Mr. Coughlin’s contract was not renewed because his message “offended” muslims (read: Jihadis in suits) like Hesham Islam on the inside. 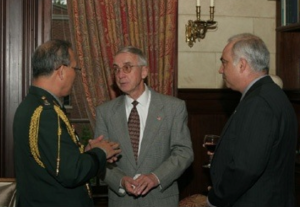 It should be noted that no one in Stephen Coughlin’s chain of command denied the veracity of his message.

And what was Coughlin’s message?  That in order to create strategies for victory against our Islamic enemy we must begin all analysis with who the enemy is and why the enemy says he fights us.  In doing so, we would actually focus on sharia (Islamic Law) as the basis for why the enemy acts, and realize Al Qaeda and ISIS are correctly quoting Islamic Law in furtherance of their actions.

The bulk of Mr. Coughlin’s work is captured in his book Catastrophic Failure: Blindfolding America in the Face of Jihad.

It could be argued the work of Stephen Coughlin was the spark that ignited the counter-jihad movement in the United States.

So where is Stephen Coughlin today?  Is he inside the national security team in the White House?  Has he been brought in to develop the counter-strategy to the Global Islamic Movement at the National Security Council?

So who is the subject matter expert on Islamic doctrine, sharia, and the Global Islamic Movement which the President says he wants to “eradicate?”

That is a good question.

While the President’s actions over the last four days will have a significant impact on the Islamic threat to the United States, the domestic strategy to uproot and destroy the Muslim Brotherhood’s network here at home requires a deep understanding of their leadership, modus operandi, and anticipated response to any actions taken against them.  It is not enough to have a nationwide arrest plan for the top ten Muslim Brotherhood organizations and their leaders and call it a day.

Any and all actions taken at the federal, state, and/or local level must be preceded by and coordinated with a significant messaging campaign so Americans will have a deeper understanding of the threat and why actions are being taken.  State and local law enforcement in this nation are not prepared to confront the massive jihadi network which is preparing for battle and need to be trained quickly on the threat and how to deal with it at the local level.

The Muslim Brotherhood has been in the United States for over 50 years and has insinuated itself into many areas of our society, including our FBI, CIA, political establishment, local/state police, and across the social spectrum.

Their’s is primarily an influence operation.  It is political warfare and espionage.  It is counterintelligence.

When senior U.S. government officials in the new administration say they have confidence in people being chosen to fill staff and intelligence positions inside DHS, the national security staffs, and elsewhere because the candidates are “undergoing FBI background checks,” this is a tacit admission there is still a significant lack of understanding of this enemy and how they operate inside our system.

It also indicates the lack of comprehension of how broken the FBI is at this point.

It is clear President Trump has good instincts when it comes to evaluating the Islamic threat.  However, a strategy for victory will require a much greater understanding of the threat than that.  Men like Stephen Coughlin need to be a part of creating that strategy.