Vehicular Jihad Like Attack in France Lawful Under Sharia

Last night, a Muslim jihadi drove a truck into a crowd at the Bastille Day celebrations (July 14th) in Nice, France killing nearly 80 people and wounding scores of others. 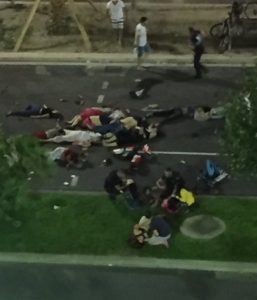 Where would a Muslim come to believe that such behavior is acceptable in Islam?

The better question is “Where would a Muslim learn such behavior is NOT acceptable in Islam?”

Since 9/11, America has seen dozens of jihadi attacks, most of which go unnoticed by police as acts of “terrorism.”

This behavior is being taught by Muslim Imams in prominent U.S. Islamic schools and mosques.

The attack in Paris using a truck to run people over is not the first time Muslims have used vehicles to conduct jihad.

On March 3, 2006, Taheri Azar, a 22 year old Muslim of Iranian decent, plowed his SUV into a crowd of students at the University of North Carolina to “avenge the deaths or murders of Muslims around the world.”  He was heard shouting “Allah u Akbar” while driving over the students.  UNC refused to call this an act of “terrorism” which drew protests from students and others.

On August 29, 2006, Omeed Aziz Popal, a 29 year old Muslim of Pakistani decent, drove over and injured 14 people in the San Francisco area of California, and killed one man in Freemont, CA.  Witnesses said he was “emotionless” and shouted “Allah u Akbar”.  This was never considered an act of “terrorism” and his family, of course, said he had mental disorders.

On December 20, 2015, Lakeisha Holloway, a 24 year old black female convert to Islam, intentionally drove her vehicle over a crowd of people in Las Vegas, Nevada killing one and injuring nearly 40 others.  Witnesses say she was heard screaming “Allah u Akbar.”  The police said this was not “terrorism” and the woman was mentally ill.

Americans can expect a greater frequency of jihadi attacks and significantly more well-coordinated jihadi attacks in populated areas in the coming months.  Muslims are becoming emboldened to do what they are instructed to do by the weakness and lack of preparedness by our law enforcement and security forces.

UTT specifically trains law enforcement in identifying and investigating jihadis and jihadi organizations supporting them at the local level.  For more information about bringing this training to your hometown, please contact us at info@understandingthethreat.com.