Understanding the Threat (UTT) has released a video showing the FBI Executive Assistant Director Paul Abate lauding one of the leading terrorist Islamic mosque in America – the Dar al Hijra Islamic Center – and its leaders. 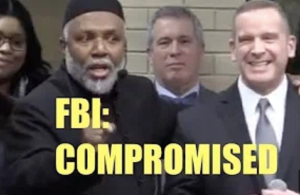 The video begins by showing that the founders, imams, presidents, board members, and funders of Dar al Hijra are linked to Al Qaeda and Hamas/Muslim Brotherhood.  The video then cuts to then FBI Assistant Director for the Washington (DC) Field Office lauding the terrorist mosque and its leaders.  One of the jihadi Imams, Johari Abdul-Malik, goes on to tell the story of how FBI Director Robert Mueller called him on his phone directly – in the wake of the arrest of a muslim who was going to attack the U.S. Capitol – to tell him that he (FBI Director) knew the Dar al Hijra has nothing to do with violence.

This video is evidence of not only how incapable FBI leadership is to deal with the Islamic threat, but that what UTT has been publishing for years its true – the enemy controls the narrative about this war at the FBI.  FBI executives are Aiding and Abetting a known terrorist outpost in America and defending its leaders, which violates federal law and, one can argue, constitutes Treason.