In 2009, Congresswoman Sue Myrick (Charlotte, NC) held a press conference with other members of Congress detailing the counterintelligence dangers of Islamic jihadi penetration in our government.  In the press conference Myrick highlighted the information contained in the book Muslim Mafia, much of which resulted from the efforts of UTT’s Vice President Chris Gaubatz, who went undercover inside the U.S. Hamas group CAIR (Council on American Islamic Relations).

Gaubatz pulled over 12,000 documents out of CAIR’s headquarters and recorded over 300 hours of covert audio/video, revealing CAIR is involved in fraud, sedition, terrorism, and counterintelligence activities against the United States. 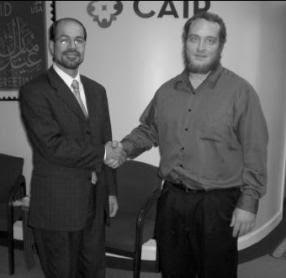 [To get your copy of Muslim Mafia click HERE]

The Muslim Brotherhood’s (MB)  World Underground Movement Plan reveals a significant part of their plan is to “Establish a shadow government (secret) within the government.”  Prior to seizing power in the United States, the purpose of the shadow government is to influence decision-making and gather intelligence.  Numerous declassified FBI documents dating back to the early 1980’s detail the Muslim Brotherhood’s subversive activities in the United States.

One such document dated 1988 confirms the MB’s intentions to infiltrate the government in order to overthrow it:

The IT scandal perpetrated against members of Congress by muslim Imran Awan (and family) – recently arrested while trying to flee the country – is much more than a “bank fraud” case.  It is a counterintelligence operation with notable success, including almost $300,000 being wired to Pakistan and access to numerous cyber accounts of Members of Congress.

The Department of Defense reported this week that its MAVNI (Military Accessions Vital to the National Interest) program to accelerate U.S. citizenship for foreign-born individuals has military leaders concerned about “foreign infiltration.”

More significantly, it was reported by The Atlantic on August 2nd that the National Security Advisor to the President, Herbert McMaster, fired Richard Higgins a few weeks ago.

This particular firing is significant because Richard Higgins ran the Pentagon’s Combatting Terrorism and Technical Support Office before joining the President’s National Security team.  From UTT’s perspective, Higgins was the most knowledgeable and strategically savvy man inside the national security apparatus with regards to the Islamic Movement and its marriage to the hard-left Marxist Movement.

Higgins’ firing is another victory for our enemies, and they know it.

Listen to Mr. Higgins measured and detailed explanation of the ideological threat from July 2016 HERE.

Readers should know that after the election of President Trump, UTT worked with a couple allies and brought to light that one of the two men vetting national security positions for the administration was sympathetic to the Muslim Brotherhood and ensured all individuals who have an understanding of the Islamic threat were not hired.

Herbert McMaster has made it clear he does not understand the threat from the Islamic Movement.  One of his many comments about Islamic jihadis includes:  “Groups like ISIL who use this irreligious ideology…this perverted interpretation of religion to justify violence, they depend on ignorance.”

The enemy definitely depends on ignorance for its successes.

Mr. McMaster’s counter-factual understanding of Islam and jihad are the intentional outcome of the Islamic Movement’s hostile information campaign which ensures our leaders and security professionals never get a reality/fact-based understanding of the Islamic threat because our leaders rely on our enemies – Muslim Brotherhood advisors – to tell us how to fight this war.

Our enemy controls the narrative.

This is also why federal/state/local law enforcement are shocked by the information they receive in UTT’s training programs.  FBI JTTF agents/officers and local police are unaware of the MB’s extensive jihadi network in he U.S. and how active the network is in communities all across America, and how much the MB has penetrated our society, especially the federal government.

UTT has to go to battle with the Muslim Brotherhood/Hamas, the ACLU, the Southern Poverty Law Center, local/national media, and others nearly every time we conduct training.

This is how the Red-Green Axis (Marxists working together with jihadis) works to control the message. Terrorist groups like CAIR work with local media, the ACLU, the SPLC and others to shut down all discussion of threats related to Islam.

The warnings given to America by Congresswoman Sue Myrick eight years ago were in line with our enemy’s stated plan and confirmed by evidence collected by Chris Gaubatz inside the Muslim Brotherhood’s Hamas front group CAIR.

Now we see it all coming to fruition.

This begs the question:  Why is Herbert McMaster, the National Security Advisor to the President of the United States, purging the National Security team of people who understand the threats (Richard Higgins and others) and ensuring others who also have a deep strategic understanding of the threats – like Stephen Coughlin – are not brought onboard?

This battle to get and keep professionals who understand the threat inside our national security apparatus is the Gettysburg of this war.

This “New Battle of Gettysburg” is a battle for a reality-based assessment of real threats from which a strategy for victory can be built versus establishment statists who refuse to identify and destroy America’s enemies.  It is a battle inside the White House and the national security sector of our government which will cripple America’s ability to fight and win this war going forward if it is lost.

We must win this battle, and it must begin with firing of Mr. McMaster. 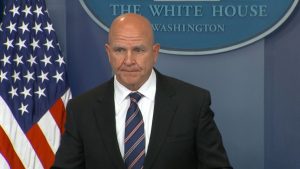 UTT continues to clearly articulate this war – because it is an insurgency – will be won or lost at the local level.  However, victory will come more swiftly if the federal government is also focused on identifying and defeating the enemy.