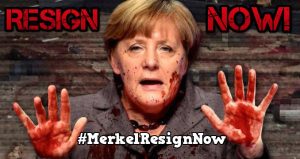 In London, the Prime Minister (and the previous Prime Minister) and many members of Parliament say the recent jihadi attack in Westminster has nothing to do with Islam, and call for embracing the Islamic community.

In Germany, Angela Merkel has opened German borders to people from sharia-adherent jihadi nations, has defended jihadis as being “un-Islamic” and, in the face of towns being overrun by jihadis, she has doubled-down on her posture.

In France, establishment leaders continue to denounce Marine Le Pen’s call for a truthful dialogue about the threat from Islamic refugee populations, and a call for French pride and liberty as being bigoted and closed-minded.

In Canada, similar malaise sweeps the land as leaders fight for who will bend over backwards farther to appease and please their Islamic residents and immigrants. 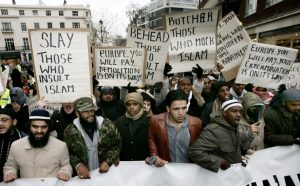 In the United States, the previous three Presidents and five or six recent Secretaries of State have belched out comments that Islamic teachings are contrary to those of Al Qaeda, ISIS, Hezbollah, Hamas, Islamic Jihad, Abu Sayef, Boko Haram, or any of the other hundreds of jihadi organizations on the planet despite the fact they all claim to act in the name of Islam and all of their actions are supported by core Islamic teachings and sharia.

Leaders of North American and European Jewish organizations unwittingly stand with Hamas/Muslim Brotherhood leaders because they “know” what its like to be singled out and wrongly targeted for persecution and bigotry.

The same is true in European and American churches where pastors of all denominations throw the Apostles Creed out the window in order to be liked by their “Muslim neighbors” under the guise of “Jesus told us to love everyone – even our enemies.”

Since both government and church leaders hold that love and compassion should be our guide – a noble and just pathway – we must contemplate this from an objective, rational, and reasonable perspective.

Does compassion towards a group of people whose doctrine and belief system call for the destruction of yours take precedence over protecting the innocent in society?

Do muslims who do not believe in or want to abide by sharia constitute a “different version” of Islam? Since objectively, muslims who are speaking out against Sharia are unanimously threatened with death, we must take this into consideration if our thought process is to be considered reasonable.

Did Jesus merely command his followers to be “gentle as doves” which has been extrapolated by some Christian leaders to mean soft-hearted and soft-minded like fools, or was there more to it?  “Wise as serpents” maybe?  Has the bar for what is right and just become only those things that make our enemies “happy” or is there more to love than that?

These are relevant questions because the fate of Western society hangs on the answers.

From the perspective of Western civilization, the government has a role to play as does the Church in civil society.  In neither case is the intentional destruction of innocent civilians an acceptable trade off for surrendering authority and power to an enemy whose stated goal is the killing of innocent non-muslims. We are called to lay our lives down for others in pursuit of righteous causes, not to allow evil to destroy what is good.

That requires us to know objective good and objective evil.

As Sir Winston Churchill said:  “Individual Moslems may show splendid qualities, but the influence of the religion paralyzes the social development of those who follow it. No stronger retrograde force exists in the world. Far from being moribund, Mohammedanism is a militant and proselytizing faith.”

Saint Thomas Aquinas was clear as well:  “Mohammed said that he was sent in the power of his arms which are signs not lacking even to robbers and tyrants. What is more, no wise men, men trained in things divine and human, believed in him from the beginning.” 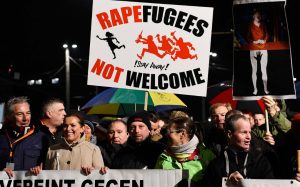 It appears the fate of Western civilization is in the hands of the people.  Citizens of free nations will either once again stake a claim in liberty and truth and risk everything for its future, or they will risk being extinguished by the cancer called Islam spreading across the globe.