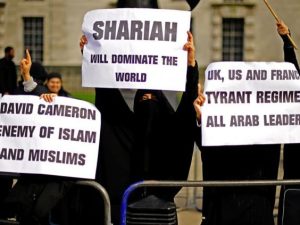 Earlier this week, UTT published the first in a series of articles about sharia (Islamic law) entitled “Understanding the Threat” which amplified the fact that sharia is the focal point and driving force behind everything jihadis across the globe are doing.

Today, we will breakdown what sharia actually is and its origins.

All Islamic sources define Islam as a “complete way of life governed by sharia.”

According to the most widely used text book in Islamic junior high schools in the United States (What Islam is All About), “The Shari’ah is the ideal path for us to follow.”

There are two sources of sharia:  the Koran and the Sunnah.

Islam is the system of life under sharia.  Those who submit to Islam and the sharia are called “Muslims.”

The Koran (also Quran or Qur’an)

According to Islam, the Koran is the “uncreated word of Allah,” who is the Islamic god, and the contents of the Koran were revealed to the Prophet Mohammad between the years 610 A.D. and 632 A.D. in the Arabian peninsula through an angel.  The Koran has 114 chapters or “suras” which are arranged in no particular order.  They are generally arranged by size from largest to smallest.  However, the first chapter is approximately the smallest, and the sizes of the chapter vary so this is not a perfect rule.

The Islamic scholars have authoritatively listed the chapters of the Koran in chronological order.  This is very important because Allah said in the Koran (2:106, 16:101) that whatever comes chronologically last overrules anything that comes before it.  This is called “abrogation.”  Allah revealed his message to Mohammad progressively over time.  By the time it was all revealed, what came last was the most important and overrules anything that was said earlier.

“It is a Qur’an which We have divided into parts from time to time, in order that though mightest recite it to men at intervals: We have Revealed it by stages.” (Koran 17:106)

So, for instance “Let there be no compulsion in religion” (Koran 2:256) is overruled or abrogated by “Whoever seeks a religion other than Islam will never have it accepted of him” (Koran 3:85) which is why we get “Take not the Jews and the Christians as your friends…” (Koran 5:51).  Chapter 5 in the Koran is the last chronologically to speak about relations between Muslim and non-Muslims.

Chapter 9 is the last to discuss jihad.

“Fight and slay the unbeliever wherever you find them, capture and besiege them,  and lie in wait for them in each and every ambush (strategem of war).” (Koran 9:5)

Furthermore, every verse in the Koran has been legally defined in the Tafsir.  The most authoritative Tafsir scholar in Islam is a man named Ibn Kathir.  For instance, the Tafsir defines a portion of verse 9:5 above as follows:  “This is the Ayah (verse) of the sword…’and capture them’ (means) executing some and keeping some as prisoners…’and besiege them, and lie in wait for them in each and every ambush’ (means) do not wait until you find them.  Rather, seek and besiege them in their areas and forts, gather intelligence about them in the various roads and fairways so that what is made wide looks ever smaller to them.  This way, they will have no choice, but to die or embrace Islam.”  (Tafsir Ibn Kathir, Vol 4, pages 375-376) 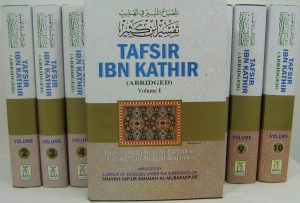 The Tafsir is taught at mosques in the United States on a regular basis.  There is no such thing in Islam as a “personal interpretation” of a particular verse of the Koran.

The Sunnah is the example of the Prophet Mohammad who is considered the al Insan al Kamil in Islam – the most perfect example of a man.  If Mohammad did it or said it, it is an example for all Muslims to follow for all time.

His words and deeds are recorded in the authoritative biographies (Sira) and the collection of the Hadith or stories about him. In Islam there are many Hadith scholars, but the most authoritative are by men named Bukhari and Muslim.

The above quote from Mohammad is doctrine in Islam.  Mohammad said it and it is authoritatively recorded by Bukhari, the most authoritative hadith scholar in all of Islam.  This is why the above quote is not only in the Hamas Covenant, it is taught at the first grade level in Islamic schools.

Example:  Why is it okay for a 60 year old Muslim man to marry an 8 year old girl?  Because Mohammad married Aisha when she was six (6) years old and consummated the relationship when she was nine (9). Mohammad is the perfect example, therefore, it is a capital crime in Islam to suggest this is wrong behavior.

The Koran, as understood with the Koranic concept of abrogation, and the Sunnah form the “Sharia” or the way for all Muslims to follow. This is a totalitarian legal system and cannot be altered or amended because it comes from Allah and was exemplified by the actions and words of Mohammad.  Therefore, when it comes to the definition of jihad, the obligation of jihad, the law of jihad, the obligation of the Caliphate (Islamic State), the rules under the Caliph, and relations between Muslims and non-Muslims, there is no disagreement among any of the scholars.

If Allah said it chronologically last in the Koran, Mohammad said it, and Mohammad did it, how could there be a legal “gray area” in sharia?