Where is the Mystical “Peaceful” Version of Islam Taught?

American and European leaders tell us that Islam is a “wonderful” “religion” which teaches peace and love among all peoples.  Officials often quote the Koran in order to demonstrate the truth of this narrative.  Yet, the question remains:  Where do MUSLIMS teach other MUSLIMS that Islam requires them to love all other people in the world, and “do unto others?”

The answer:  Nowhere on the planet except in Muslim homes where parents teach their children these principles, which are entirely contrary to the teachings of Islam.

Islam is Sharia and Sharia is Islam.  Sharia (Islamic Law) comes from the Koran (the direct word of Allah) and the example of the prophet Mohammad (Sunnah) – the most perfect man according to Islam.  Allah in the Koran said whatever was revealed to Mohammad chronologically last overrules what was revealed before it (Koran 16:101, 2:106) – the Koran was revealed progressively over time.  The last chronological verses in the Koran to discuss jihad include Sura (chapter) 9 verse 5 which says, “Fight and slay the unbeliever wherever you find them and lie in wait for them in each and every ambush.” 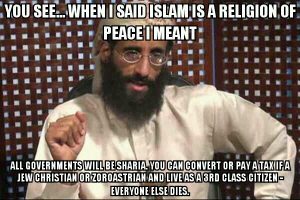 Verses in the Koran such as “Let there be no compulsion in religion” are followed by later verses like Koran 3:85 stating that all people who are not Muslim go to hell, which results in Koran 5:51 which states, “Take not the Jews and the Christians for your friends…”  Muslims who do will go to hell.

In fact, the Koran says that non-Muslims are the “worst of creatures.”

“Those who reject (Truth), among the People of the Book and among the Polytheists, will be in Hell-Fire, to dwell therein (for aye). They are the worst of creatures.” (Koran 98:6)

Mohammad himself, in the most authoritative reports (hadith) in Islam, said, “I have been commanded to fight people until they testify that there is no god but Allah and that Mohammad is the Messenger of Allah.”
(Bukhari 385 / Muslim, Book of Faith, 29)

Authoritative Islamic hadith by the most revered hadith scholar (Bukhari) says the Muslim prophet Jesus will return at the end of days to kill all the Jews and cast all Christians into hell for not converting to Islam.

The purpose of Islam, according to Islam, is to eliminate all places on the earth where sharia is not the law of the land (Dar al Harb/House of War), until the entire world is made the Dar al Islam (House of Islam) under sharia.  Then you have “peace.”  The vehicle to do this is called “jihad.”

So, Islam is the religion of peace, so long as you remember to translate English to English through the filter of sharia and how it defines “peace.”

Back to the question:  Where is the Mystical “Peaceful” Version of Islam Taught?

It is not taught in Islamic elementary, junior high, or high schools anywhere on the planet.

It is not taught in the most prestigious and oldest Islamic schools of jurisprudence, such as Al Azhar in Egypt.

It is not taught in Islamic Centers/Mosques anywhere in the Middle East, Asia, Europe, Africa, or North America.

Therefore, if we want to understand Islam, we cannot listen to what Muslim leaders say.  We must read what they teach each other when we are not around.