It is no oversight the U.S. Muslim Brotherhood is not yet designated a Foreign Terrorist Organization (FTO).  In fact, the issue has now been pushed off the table by the Trump administration as the result of a significantly successful information operation perpetrated by the International Muslim Brotherhood continually supported by media outlets. 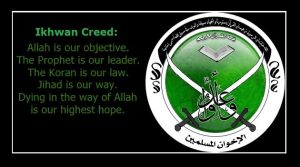 It should be noted that the Senate bill to designate the Muslim Brotherhood a Foreign Terrorist Organization (FTO) provides a significant amount of information revealing this designation is a reasonable and necessary action to protect the citizens of the United States and rid this nation of a cancer that continues to grow daily.

In the February 23, 2017 edition of the Egypt International (www.almasryalyoum.com), the International Muslim Brotherhood’s Foreign Relations Officer, Mohamed Sudan, revealed the IMB coordinated with a number of nations and entities in a massive information operation (“Propaganda campaign”) to keep the new Trump administration from designating the U.S. MB a terrorist organization.

“People close to former Secretary of State Hillary Clinton helped the group access media companies and contracting, saying that those companies had a role in the completion of communications between the international Muslim Brotherhood and members of Congress, according to the terms of the contract entered into between the parties.”

In the article, the IMB’s Secretary General, Ibrahim Munir, thanked Turkey and Qatar for their assistance in this project.  The article went on to say:

“Brotherhood sources confirmed the group contracted with an American advertising company last month to oppose the bill submitted to Congress which aims to classify the MB as a terrorist organization. The sources added the international organization will pay $5 million for corporate propaganda and the publication of articles stating the group rejects terrorist acts to correct its image in the American media.”

Remembering this article was published in Egypt on February 23, 2017 about events that already took place, what was the outcome of this hostile information campaign?

On January 26, 2017, the Wall Street Journal ran a threatening article entitled “Blacklisting the Muslim Brotherhood Carries Risks.”  The article made it clear:  if the Muslim Brotherhood is designated a terrorist organization, “it could trigger unexpected consequences.”  This article was meant to strike fear into the hearts of Islam’s enemies.

On February 22, 2017, the New York Times published an article entitled “I am a Muslim Brother, not a Terrorist,” written by Gehad El-Haddad, the spokesman for the International Muslim Brotherhood who now sits in an Egyptian prison.  This was a propaganda piece that supported the idea the Muslim Brotherhood is not a terrorist organization.

It is not unusual for the New York Times to defend enemies of the United States.

This is the same New York Times, by the way, which identified Imam Hesham Shashaa – operating in Germany – as a moderate. Yet, last week Shashaa was arrested by the Germans for supporting ISIS. Weird.  Just like when the New York Times called Anwar al Awlaki a moderate, right before the U.S. drone striked him and killed Awlaki for being the Al Qaeda leader in Yemen, among other things.

Oddly enough, while Gehad El-Heddad was the spokesman for the Muslim Brotherhood’s candidate for President of Egypt, he was on the William J. Clinton Foundation where he served from August 2007 to August 2012. 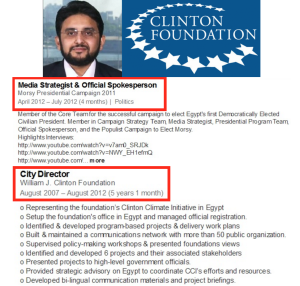 To summarize, the leadership of the International Muslim Brotherhood publicly stated they have an operation underway to influence the U.S. government, the media, and the American public not to designate the Muslim Brotherhood a terrorist organization.  The MB reports Hillary Clinton provided support for this operation, and a key node in the operation is the spokesman for the IMB who also spent five (5) years working with the Clinton Foundation.

And, at the end of the day, the Trump administration has taken this issue off the table, thereby surrendering to our enemy and giving them a significant victory.

This is why UTT continues to say, this war must and will be won at the local level.