Will Saudi Arabia Lead Islamic Military Forces Against Jihadis or Us?

Sharia is always the filter through which the un-Islamic world must understand leaders of the Islamic world. 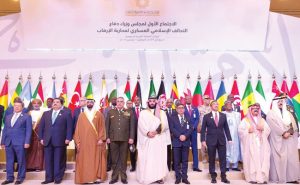 The focus of the meeting was to deal with “terrorism” in muslim countries.

Many in the West are “wondering” if this Prince will be the one muslim leader to “transform” Islam into the peaceful, love-thy-neighbor, utopian Islam Western leaders are sure exists.

In his opening remarks the Prince stated:  “The biggest threat from terrorism and extremism is not only killing innocent people and spreading hate, but tarnishing the reputation of our religion and distorting our belief.”

Applying the rule that sharia (Islamic law) is the filter through which we must translate the Prince’s comment, we get:

“The biggest threat from the killing of muslims for non sharia-prescribed reasons and moving the Islamic Movement along too quickly is not only the unlawful killing of muslims and the spreading of un-Islamic ideas, but the reduction of Islam’s ability to deceive the infidels in order to spread sharia.”

When read in its proper context, the idea the Saudi Prince, or any other credible leader of a sharia-adherent Islamic nation, would want to do anything other than what Islam/sharia commands them to do is folly.

Will Islamic nations join together to militarily confront the jihadis of the Islamic State and Al Qaeda or the “terrorists” of the non-muslim world?

What do you think is more likely?